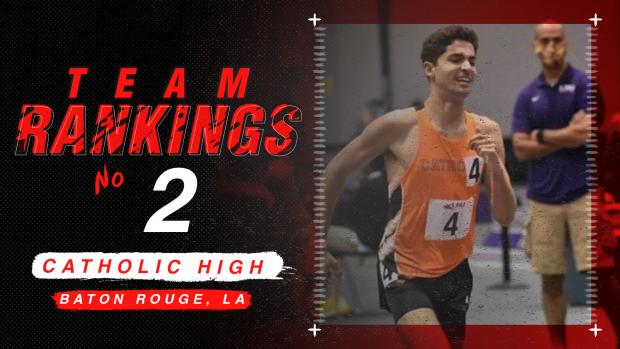 Catholic High is the four-time defending 5A cross country champion and held a considerable victory over the rest of the field last year. The Grizzlies are looking to return for their fifth consecutive title even though they are losing four of their runners that competed at the 2020 5A XC State Meet. Even though the team is losing over half of its runners that competed at the state meet, Catholic High has been no stranger to bringing up new, talented runners to the varsity squad. The Grizzlies have been known for their deep squads and tightly packed groups, which makes them a team to stay wary of year in and year out.

Sophomore David Lemann returns with the 7th fastest time for the team in 16:44. This past year was Lemann's first season of competition and will most likely have more to him this Fall as he matures.

Senior Bennett Saia returns with a personal best of 16:37 over three miles, but the most interesting aspect about Saia is that he is an overall athlete. Last year, Saia proved to be a jack-of-all-trades by running decent times during the cross country season and transitioning to a completely different aspect of competition during the track season. He competed in the long and triple jump and on top of that, he put up exceptional marks in each of those events. It is hard to tell how well Saia will perform this coming season, but do not count out this all-around athlete.

Senior Clark Chustz comes back with the 5th fastest returning time for the Grizzlies with a 16:16. During the track season, he mainly competed in the 3200m and concluded the season with a personal record of 10:23.

Senior Cody Rickhoff returns as the 4th fastest time for Catholic High with a 16:14. He also went on to compete in the 3200m during the track season and recorded a personal best of 10:20. Rickhoff and the previously mentioned runners are the next best bet for Catholic High to finish on top again this year. Keep an eye on these runners, as they could determine the future success of the team.

Senior Steven Mayer was the Grizzlies 5th man at the 2020 state meet and is now the 3rd fastest returning runner for the team. Last year, Mayer ran a time of 15:58 over 3 Miles and concluded his cross country season with a 15th place finish in the 5A field at the state meet. He had an even more impressive season of competition this last Spring during the track season. Mayer ended up running 9:45 for the indoor 3200m and 4:32 for the 1600m. This could be a successful season for Mayer if it resembles anything near this past track season.

Senior Max Guillot finished as Catholic High's 7th man at last year's cross country state meet. He finished in 28th place and finished his season with a personal best of 15:52. During the track season, Guillot focused on the 800m as his sole event as boasted a best of 1:59. The most interesting aspect about Guillot is that he was an inexperienced cross country runner last year, with that being his first season. He could have in store some better performances this year as he has more experience under his belt.

Senior Daniel Sullivan is the fastest returner for the team by a wide margin. He concluded last season with a best of 15:25 for 3 Miles and took home the bronze medal at the state meet. Sullivan is no stranger to the championship stage, he has been present and putting up fast times ever since he was a freshman; however, he has yet to claim himself a state title. That may change this year with Sullivan being the fastest returning runner in the entire 5A field. During this past track season, he was not shy to perform. He recorded a 1:57 for the 800m, 4:22 for the 1600m, and 9:53 for the 3200m. Sullivan has a lengthy resume to his name, and it will be interesting to see if he can add an individual state title to that list.