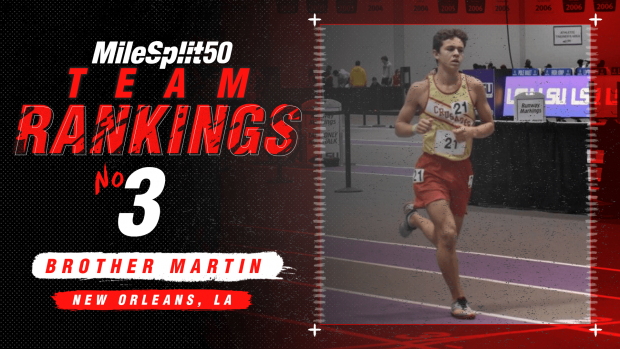 During the 2020 5A XC State Meet, Brother Martin took home the bronze in a tight race against Ruston. The team was lead by then senior and low-stick Gary Sandrock and now the leadership of the team resides in Landon Sequeira and Dane Dauzat. Looking at the team, Brother Martin does well to keep a tight pack of returning runners with a 1-5 split of 31 seconds. A close pack like this does not come around too often and it serves well as Brother Martin's greatest strength coming into this season. The team is also comprised of you g talents that could blossom into more experienced and capable runners this Fall.

Junior Gabriel Levy returns this season with a personal best of 16:46 and the potential to be Brother Martin's 6th man this year. Much like Heidingsfelder, Levy's personal record for 3 Miles looks like an outlier compared to his other performances; however, it would be foolish to count him out based on those times. During the track season, Levy did not race much but he did gain new personal records with a 4:51 1600m and 10:32 3200m.

Sophomore Gabriel Metoyer made a big splash as a freshman last year. Even though he did not compete at the state meet, he still recorded a fast time of 16:42 in his first cross country season. Looking at his track season, he also showed-up and delivered a time of 4:46 in the 1600m. Metoyer seems to be a rising star not only for Brother Martin, but the entire state.

Sophomore Luke Regan is another young talent for the Crusaders. Regan concluded his freshman year with a time of 16:28 and finished 7th for his team at the state meet. During the track season, Regan demonstrated yet another impressive freshman performance with a 10:15 for the 3200m. It is important to remember that these are results of Regan's first year competing in cross country and track. Much like Metoyer, Regan could have potential to be a top contender in the state later on.

Sophomore Eyan Calico caps off the top returning freshmen for Brother Martin with a 6th place finish for his team at the state meet and a personal best of 16:46. It should also be noted that it was also Calico's first ever year of competition for cross country and track. During the track season, Calico brought in strong times for his age and recorded a 4:48 for the 1600m and a 10:26 for the 3200m. Brother Martin has a strong set of sophomores right now that could very well lead to three low-sticks in the future if they stay on pace with their current performances.

Senior Dane Dauzat holds the fastest returning time for the team with a 16:14 and also finished 2nd for it at the state meet. He concluded his race not too far behind teammate, Landon Sequeira, with a 39th place finish. On top of that, Dauzat could slide into the top 20 at the state meet this Fall with the large amount of seniors, from the year before, graduating.

Senior Landon Sequeira is the top returning finisher for the Crusaders at the 5A XC State Meet with a personal best of 16:17 over 3 Miles. Sequeira finished at 26th place last year and has the chance to make an appearance in the top 20 or even the top 10 this Fall.