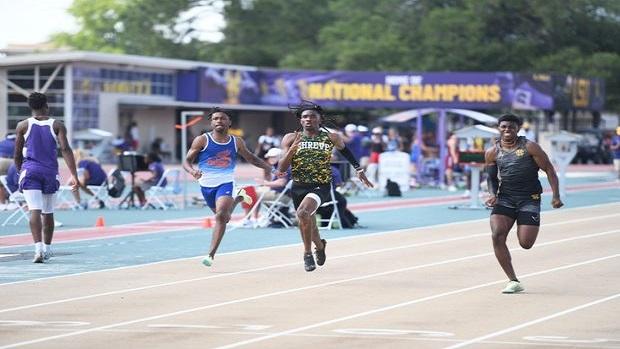 Who is the fastest high school boy in the state of Louisiana? On Saturday, May 7th at the LHSAA State Outdoor Meet it was Holy Cross's Krosse Johnson, who won Class 5A with a time of 10.54.

However, his outstanding effort in the 100 meters paled in comparison to what he did on the anchor leg of the 400 meter relay. A collection of "Whooos" came from the packed Bernie Moore Stadium as Johnson made up at least a 7 meter deficit  to pass the anchor leg from Ruston High School over the last 100 meters of the race.

While Captain Shreve junior Marquez Stevenson ran a 10.59 to finish second to Johnson in the open 100 meters, it's the start that had "Macho" asking "what if" when he returned to spring football practice two days after the state meet.

"It shows you what kind of kid he is talking more about finishing second in the 100 meters than he is his championship in the 400," Shreve head coach Bryant Sepulvado told Daniel Brown from KTBS Shreveport.

HOLY CROSS' KROSSE JOHNSON TALKS ABOUT HIS STATE CHAMPIONSHIP IN THE 100m!

While he ran the third fastest time at the LHSAA State Outdoor Meet, Woodlawn-Baton Rouge's J'Marcus Sewell was visibly upset after getting off the the No. 3 spot on the podium. Sewell ran a 10.61 to finish third in Class 5A.time to shine.

With the top three fastest sprinters in the state all returning, it will make for an exciting 2023 championship season to see if all three are able to make it back and threaten the state composite record of Fair Park's "Rocket" Rod Richardson's 10.20.

Most of the top sprinters outside of the top three will be returning in 2023 as well.

The list include's Sewell's teammate, Woodlawn junior Jordan Mathews (10.61), Parkway junior Jaylan White (10.66), and the "roadrunner"--Karr sophomore Ra'hji Dennis, who finished second (10.69) by the narrowest of margins in Class 4A to Warren Easton's Leon Elloie (10.68) in the Class 4A 100 meters.

Two other young sprinters deserving mention for their accomplishments are the Class 3A state champion Johnny Woods from Wossman (10.70) and the third place finisher in Class 4A, Carencro's Kohen Beavers (10.85).

If you believe that Holy Cross' Krosse Johnson is in fact the fastest high school sprinter in the state of Louisiana, and he provided more than enough evidence to support the claim, it only leaves more question to be answered.

Will Krosse Johnson be the fastest high school sprinter in the state of Louisiana at this time next year?

SHREVE'S MARQUEZ STEVENSON TALKS ABOUT HIS STATE CHAMPIONSHIP IN THE 400m!