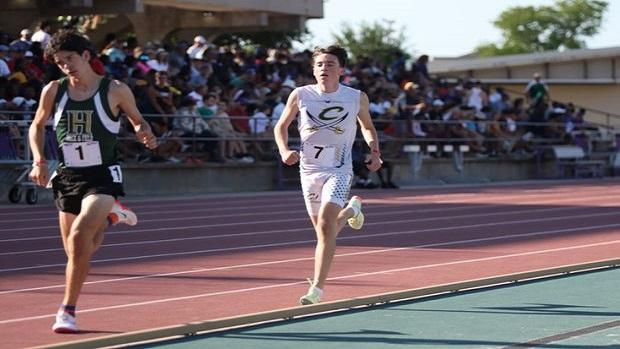 Last Fall, Calvary freshman Jackson Burney finished 29th in the Class 1A Boys' LHSAA Cross Country State Meet in Natchitoches. To finish that high, when there are 119 runners is a good accomplishment-especially for a freshman.

But good is the enemy to great, and Burney wasn't satisfied.

Despite his two gold medals after the first meet of the season, there was nothing that indicated Burney was on his way to an LHSAA State Outdoor Championship, but that is exactly what happened last Friday at LSU's Bernie Moore Stadium.

Burney ran a 2:01 in the 800 meters and in the process defeated the defending state champion-Ascension Catholic senior Chase Walker (2:03.49) .

"It wasn't until after regionals I thought I had a chance to win state," Burney said.

He went into the race as the No. 2 seed behind Ouachita Christian's Garrett Simmons, who won the Region I-1A Meet with a 2:02.77.

It didn't come easy for Burney in the championship race. He was in fifth place with 200 meters remaining.

The legs started pumping, too, and carried Burney to the front of the pack, where he took the lead with 60 meters remaining.

As he crossed the line as a state champion, Burney felt a sense of accomplishment.

"I felt great," Burney said. "It was super exciting. I was glad that my hard work paid off."

The hard work that Burney has put in didn't start at the beginning of the school year. It started in the  summer running for River Cities Track Club.

"It helped a ton," Burney said. "Last year was my first year to run with River Cities. To be able to go out three times a week and practice with other runners, it helped to motivate me going into my freshmen year."

Having other runners to run with him is not a luxury that Jackson has at 1A Calvary. He is the only distance runner on the track team.

Calvary AD and Head Football Coach Rodney Guin, who filled in for Calvary head track coach Adam Hester, at the LHSAA State Outdoor Meet was impressed with what his freshman wide receiver accomplished on the track.

"He has been getting faster every week," Guin said. "He wasn't nervous going in. He ran summer track, and they did a good job with him getting him ready. He knew those guys he was running against. He knew he could beat them. He knew what time he had to run to do it."

As impressed as Guin is with what Burney has done on the track this year, he is even more impressed by what he does every day after practice.

"It doesn't matter if it's football or track," Guin said. "Every day after practice, he is going to find you, come up to you, shake your hand, and say 'thank you, coach.' That's just the kind of kid he is."

Burney, who also finished No. 7 in the 1600 at the state meet, will carry the momentum into the summer track and field season.

"I just want to improve my time overall," Burney said. "That's the goal for summer."