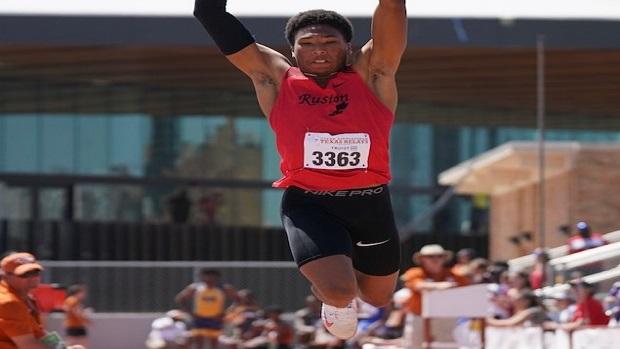 RUSTON'S BRANDON GREEN JUMPS IN THE FINALS OF THE TEXAS RELAYS

Ruston's  Brandon Green came into Saturday's 94th running of the Clyde Littlefield Texas Relays ranked as the No. 2 triple jumper in the nation, second only to his District 2-5A rival Jeremy Nelson. Green will leave the Lone Star State as the nation's best with a winning jump of 51-3.75.

After the preliminary rounds, it looked as if a change was in store for the national rankings as both Green and Nelson struggled to find the form which helped them come into the contest with impressive resumes.

Ruston head coach Allen Whitaker went down to the rail to talk to Green before the finals began.

"He was mainly telling me to get my foot down so I could get on the board," Green said about the pep talk he received from his coach. "He also said to make sure I carry my phases out."

Green did just that, not before encouraging the track and field fans in attendance at Mike A. Myers Stadium to help him down the runway.

"The crowd here, you know, engages a lot," Green said. "So when I got that clap going, the crowd engagement and my teammates pushed me on. I came off the board good. My phases were long."

It didn't hurt that he also was able to go head-to-head with Nelson for the first time during the 2022 outdoor season.

"We are both competitive," Green said. "We go at it and leave it on the track."

Green will now look towards Friday when he will compete for the final time at his home  meet, the "Hoss" Garrett Relays on the campus of Ruston High School.

THE TOP 15 TRIPLE JUMPERS IN THE NATION