Special thank you to Terryl Chatham for the cover picture

Years have a way of burying memories in such a way that when we remember them, it feels like a revelation. Sometimes a whole generation passes by and we find the next one awed by the mystique of the former. This is especially true when we have a decline followed by a resurgence like we have seen in distance running over the past fifteen years around the country. Names like Prefontaine and his likeness adorn the iconography of a budding epoch of dedicated youth who are pushing the envelope of high school distance running.

We are creatures of the mid-south, a pocket of land dismissed and forgotten by the rest of the country in recent years for our lack of productivity as a distance running state. There was a time when Louisiana wasn't a relegated mid to low tier distance running community. Even the aforementioned Prefontaine had his high school rites of passage cross paths with a runner from Louisiana. This era, while gone for now, should not be left without us tipping our hats and giving an earnest "thank you" to those who gave us the foundation for the status quo. 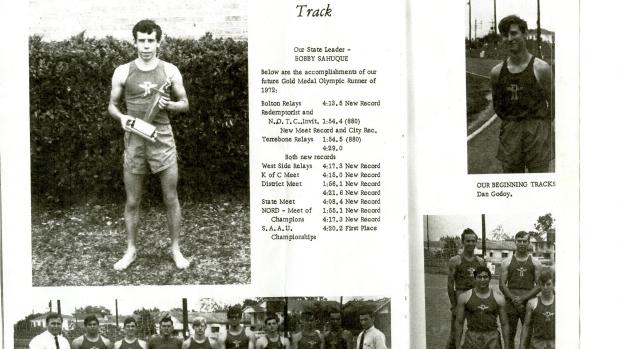 A group of men sat in semicircle in front of a television, which produced a slideshow of pictures that told the story of a man's life. There was some laughing, sincere sadness, and joy of remembrance in their voices as they reminisced of the man, Bobby Sahuqué, a pioneer of distance running. Bobby's life had its ups and downs and his later years are best left for his closest family and friends to discuss. We will look at him in the light of who he was on the track, and what we can learn from him over thirty years after his spikes were hung up.

"There was Bobby and there was the rest of us." Mike Cambre told me over the phone, showing excitement to talk about his friend despite the recent loss: the results certainly showed as much. The prodigy from the now defunct Redemptorist High School of New Orleans led a cadre of distance runners in the crescent city. The '69 graduate was a charter member of the New Orleans Track Club, a small training group of local distance runners who had the audacity to attempt to be good runners from the Big Easy in the late 60s.

"If you saw someone running in Audubon Park you went to find out who it was," Gary Stanley told me, offering the rarity of a runner at that time in the now jogger-laden Audubon Park. Gary, current head coach at Louisiana Tech University, seems to still be amazed by Bobby and his efforts that took him down a 4:08 mile at the state meet his senior year. It was quite apparent that while Bobby excelled on the track or on the cross course, he was certainly an underachiever in practice; often choosing to run with the pack of runners to whom he was quite the superior. I was even told a story of teammates having to occasionally wake him for practice, although the facts of this tale could have been greatly exaggerated. What is not an exaggeration is the prowess the young Sahuqué demonstrated on the track.

Bobby had a tenacity in his racing that garnered him All-American honors by Scholastic Magazine in 1969. He ran his 4:08.4 at the AAA state meet and as noted by Scholastic, was the first runner from the South to break 4:10 (and mind you this is for a real mile, not the 1600). Believe it or not, Bobby had not been the state record holder until that day. John McKinnon of Fair Park in Shreveport had notched a 4:12.6 indoors the year before, a time which Bobby did not best until his last HS race in Louisiana. His efforts went noticed out west as well, and as newly crowned as state champion he was invited to the Golden West Invitational where he would showdown with some of the top talents in the country including a boy from Coos Bay, Oregon named Steve Prefontaine.

By all accounts Bobby was a bit of a free spirit. He ran barefoot and often conversed with runners in his races. You could find him during the cross country season with his crew of harriers from across the city, from different schools, but all under the banner of the New Orleans Track Club. The band of brothers trained with each other rather than their teams in the fall, as many schools did not have full squads. These runners came together from Fortier, Redemptorist, East Jefferson, St. Augustine, and more. In their minds they were a team regardless of what singlet they put on.

Bobby, as well as the others, were coached by a name the local running scene may find recognizable: Larry Fuselier. Larry was a coaches' coach. He started practice at 4 P.M. on the dot and if you were late to practice you would need to run to catch up to the rest. Practice was either at Tulane's track or Audubon Park. It was Bobby's familiarity with Tulane that eventually landed him a scholarship spot on the Green Wave roster where he ran on a squad that produced several NCAA championship qualifiers like Taylor Aultman (who prepped at Fortier) and had run 14:35 for 3 miles in high school.

The men sitting around the funeral parlor joked that Sahuqué had failed to reach his goal in the mile. As just as sophomore he had discussed with some teammates that he would run 4:08.6 for the mile by his senior year and even had worked out the splits. Bobby failed to hit his time, running 0.2 faster than planned. It was that 4:08.4 that took him to the Golden West Invite where he would ultimately finish fourth in that race with a 4:11.0, but well behind Prefontaine who set a personal best for the time with a 4:06.0. It is estimated that over 6,000 fans turned out to watch the meet. It could be argued that Bobby's fourth place finish was more important for the running scene in Louisiana than his 4:08.4 at the state meet. This proved Louisiana wasn't devoid of running talent, nor was the environment too inhospitable to engender a national caliber athlete. Bobby had paved the way for another Bobby (Beck) and a kid named John Ratcliffe (who ran at Bonnabel and was coached by Gary Stanley who I mentioned earlier), both of whom broke 9 minutes for two miles and were competitive at a national level.

The state athletic association, in their infinite wisdom, would change the distances to meters and throw out the old record for distances based in yard for the state meet, burying the former records, many of which are superior to the ones listed on the meet programs each May. It would be nice to see some of the old names at least recognized alongside the likes of the metric record holding compatriots. We could look over and see: Bobby Sahuqué, Redemptorist High 3A- 4:08.4 and think to ourselves, "Wow, I'm sure that was quite a run that night."

Hopefully the memory of Bobby is one that is empowering, and one that will make you stop and think about your expectations for the sport here in Louisiana. I think one thing Bobby had going for him was that he didn't have any reason to think he couldn't be the best. He didn't know Louisiana wasn't supposed to produce distance runners. And he certainly wasn't obsessing over the idol status of a guy like Steve Prefontaine. Bobby would race whoever he lined up against, and obviously wherever as well. There is a good lesson here about where we need to return to as a running community in the state. We should quit putting limitations on what we can do, and simply attack each day with fervent passion Bobby had in the 60s. 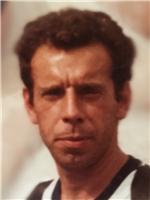 In memory of Bobby Sahuqué