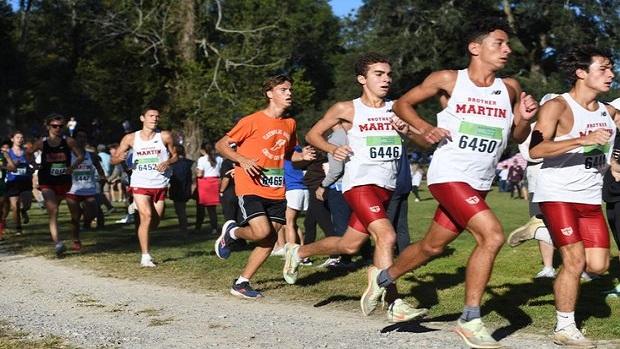 Who is the MileSplit LA Boys' Performer of the Week?

It's that time of week. Time to vote on your favorite performer from a weekend full of excellent racing. The poll will close on Sunday at noon. Help your favorite runner become the MileSplit LA Boys' Performer of the Week!

BROTHER MARTIN'S EYAN CALICO - Calico was just one of several Crusder harriers who turned heads at Louisiana's largest cross country meet at Baton Rouge's Highland Road Park. Calico finished fourth with a time of 15:18.40.  Calico started his year with 17:22 5K at the Mobile Challenge of Champions. He dropped to 16:04 at the Dominican/Holy Cross Invitational. And now a 15:18 at the St. Joe's Invitational. How low can he go?

ZACHARY'S RHEN LANGLEY - It was a big week for Langley, who committed to Louisiana State University just a few days before competing in the first race of his senior season. He ran a personal record 15:26.37 at the St. Joseph's Invitational to finish No. 6.

BEN FRANKLIN'S ALASTAIR DENG - Followed up his season opener, a second place personal record 5K (17:43.11) at the Nicholls Invitational in September by getting his first win of the season at the Country Day Cajun Classic at City Park in New Orleans. Once again, Deng had a personal record, running a 16:34.65.

LOYOLA'S FRANKLIN ROEMER - The Flyer had a huge PR of 15:53.80 at the C.E. Byrd October Invitational. He finished second in the race-- just behind Captain Shreve's Evan Johnson. It's the first time Roemer has been sub 16:00.

TEURLINGS CATHOLIC'S JUDE GUIDRY - Guidry had a big day at ESA's Aint No Shade in Cade, finishing as the runner up with a time of 15:44, just behind Highland Baptist's Tyler Blissett. Guidry led his team to a team title as Teurlings Catholic scored 28 points, placing all five runners in the top ten.

JESUIT'S JACK DESROCHES - The 2021 LHSAA Class 5A runner up from a year ago helped lead the Blue Jays to a victory at the Nike Town Twilight Invitational in Terre Haute, Indiana. Desroches ran a 15:11.40 to finish No. 12. The time was two seconds shy of his 15:09 PR at RunningLand last December.