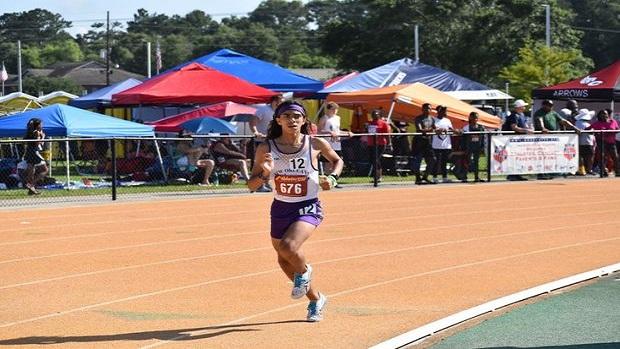 The stars were shining bright last week at the AAA Club Championships in Orlando, Florida, and the New Orleans Metro Stars look to shine even brighter at the AAU Junior Olympics in Greensboro, North Carolina during the first week in August.

It was the first rodeo for 13-year old Braedon Gautier. After winning a national championship in the long jump a year ago, Gautier successfully defended his national title in the event by jumping 19-2.5.

As well as he did, New Orleans Metro Star director Melissa Brown is wanting more from Gautier.

"He astounds us with his natural athletic ability," Brown said. "We believe he can be one of the top athletes in the nation if he puts in the work at practice. Everything was hitting on all cylinders for him at AAU Club."

"This has been a long time coming for Tosha," Brown said. "He has battled through injuries and growth spurts. It was great to see him finally on top. We are expecting some good things from him at Junior Olympics."

The Stars were shining bright in the field events as well.

Eight-year old Albert Edwards III won the 8U long jump with a 12-8.

Like Gautier, Edwards also performed well in his other events finishing second in the 200m (29.48) and sixth place in the turbo javelin (48-5).

Brown said Edwards came out of his shell after a team visit to an Orlando amusement park.

"I think it (the trip to the amusement park) motivated him," Brown said. "Being around the older kids. He was turned up after that."

In the AAU Primary Championships, the Stars had 7-year old Zamaya Shepard win a national championship in the turbo javelin, throwing 41-6. Shepard also finished fifth in the 400m (1:23.40).

"She is the most coachable young athlete we have," Brown said. "With some of them it's like herding cats, but when I look for Zamaya to tell her to go warm up, she is halfway to the event area. She is like an assistant coach, and I appreciate her taking the time to really learn the sport."

Sahara Cooper Okapabli had a couple of top five finishes as well. She finished third in the 15-16 girls shot put (32-0) and finished fifth in the triple jump (37-4).

"He is the man with the plan," Brown said. "I'm just the facilitator."

The Metro Stars will be back in action for the final meet of the summer at the AAU Junior Olympics in Greensboro, North Carolina. Fans will be able to watch the meet live on MileSplit.