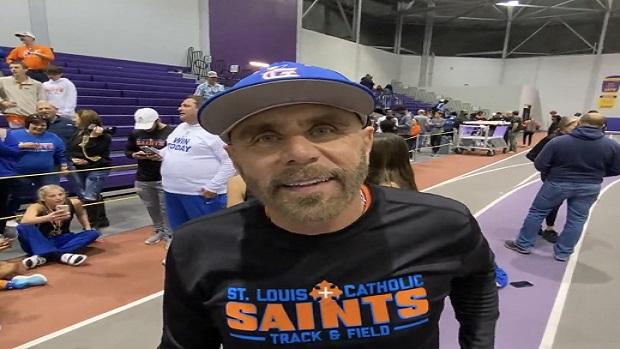 ST. LOUIS'JOHNNY GIORDANAO WAS ALL SMILES AFTER HIS SAINTS WON THE LHSAA STATE INDOOR MEET!

Sometimes, the internet can be a good thing.

That was certainly the case yesterday when St. Louis girls' head track and field coach Johnny Giordano, who saw a coach in another state had won a coach of the year  award, he searched and found that he was the U.S. Track & Field Cross Country Coaches Association (USTFCCCA)Louisiana Girls' High School Coach of the Year.

It is the second year in a row Giordano has won the award.

"When I saw a coach in another state post something, I looked and saw the coach from Ouachita Christian had won the boys for Louisiana," Giordano said. "I said, 'let's see who won the girls' award' I clicked on the girls and saw my name and said 'yippee.' I'm going to be honest, it's a thrill for me."

In May, the Saints won their fifth consecutive state meet.

Every state championship is special, but the first one-the LHSAA State Indoor Meet in 2020-was the most memorable for Giordano.

"Nobody knew one athlete on our team when we walked in the building that year," Giordano said. "Kenzie Touchet, who was a freshman, got the baton in ninth place on the anchor leg of the mile relay-the final event of the meet- and was able to move us into first place. We won that race, and barely won the meet."

"I think that state indoor meet paved the way for what we have accomplished since then," Giordano said. "On that day, we picked a great time to have a great meet, and it really set the stage for us."

Since that performance in her first state meet, Touchet and teammate Ella Segura have become household names for Louisiana high school track and field fans. Both will return in 2023 to lead the Saint for their senior season.

Girordano to replace some of his valuable seniors, like Tia Reder and Emma Freeman, who helped St. Louis score 53 points in the field events at the 2022 LHSAA State Outdoor Meet.

"That senior group was an extremely talented bunch," Giordano said.

Even after winning their first of five straight state championships, Giordano's team had to overcome adversity from Mother Nature in the form of back-to-back hurricanes.

"We had athletes getting together and working out on their own when there was no power," Giordano said. "We were virtual for half of a school year during that time as this area just tried to get back on it's feet. The way the girls overcame those obstacles was truly remarkable."

"This award that I am receiving is a testimony to their work ethic and dedication to being the best that they can be," Giordano said.