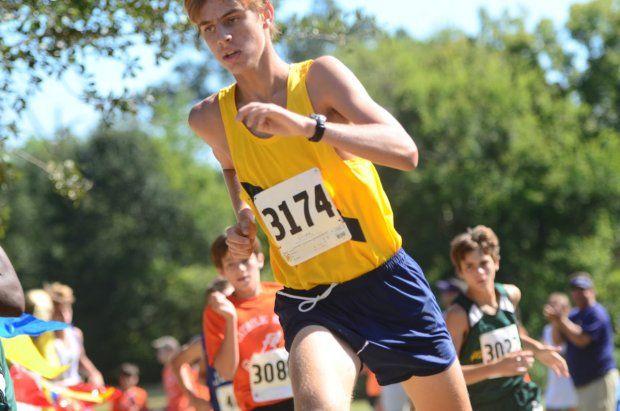 Who do you look up to as an inspiration to your running?

Coming from Episcopal, there is a long line of inspirational runners who came before me and who are on the team right now. Some specific people that I would mention would be Coach Dupe, as he has always been a good role model since I joined the team as a sixth grader. Another person who sticks out is Bryan Stamey, who was an exceptional runner and good friend. It has taken loads of stress off of me knowing that he is only a text away. Finally, everybody on the team right now, from the sixth graders to my fellow seniors inspires me because I know that I have to do my best so that I don't let them down. For example, my friend Dylan Massen-Veeters most likely will not run varsity. Despite knowing this he is quite possibly the hardest worker in the senior class. People like Dylan inspire me because I know that I am doing him an injustice if I don't work as hard as he does.

Up to this point in your running career, what has been your most memorable moment?

This past track season, the District meet was on my birthday. As I was finishing the 3200, the whole team lined the sides of the track for the last 20 meters or so and sang happy birthday to me. That is just one of many examples that show the level of camaraderie that I have come to expect be being a member of the track and cross country teams.

How do you keep yourself grounded the year after winning an individual state title?

I stay grounded after the track state meet because I know that there are people in 2A, even people on the Episcopal team, such as Kris Jackson, Kenny Schafer, and Michael Lee, that could have beaten me and have beaten me on many occasions in the past. As Coach Dupe tells us, one week's performance won't win the next week's meet.

If you only had one song to listen to before your race, which would it be?

I would probably listen to the song "The Letter Expirement" by Periphery. When I was in middle school, my iPod broke one season so I could only listen to this song before meets. Cross Country season just doesn't seem the same without it now.

What is your favorite workout?

This summer we tried a new workout where the goal was to see how many mile repeats we could do at sub 6:20 before we started running slower. The result of this workout was a hybrid between a long run and some speedwork that was a refreshing change of pace towards the end of the summer.

How do you manage to keep your academics in order while competing at a high level year round?

I manage to juggle cross country and school mainly with the help of my teachers. Most students at school participate in some form of athletics or extracurricular activity, so the teachers are very accommodating for athletics. That being said, some days boil down to having three options between academics, cross country, and sleep, and I only get to choose two.

What meets are you looking forward to the most this year?

As overly-energetic sixth graders at our first Highland meet, a few of us got bored on our warm-up and decided that we would play on the playground equipment by the tennis center. Ever since, we have assigned each piece of equipment to a person whose duty it is to swing or slide before we do our stretching.

How many days a week do you run?

And lastly, what food do you crave most after a hard workout or a race?

After meets we go to Backyard Burgers, and I always pig out with a bacon cheddar burger and a chocolate shake, completely undoing any fitness gains that I had made in the previous week.