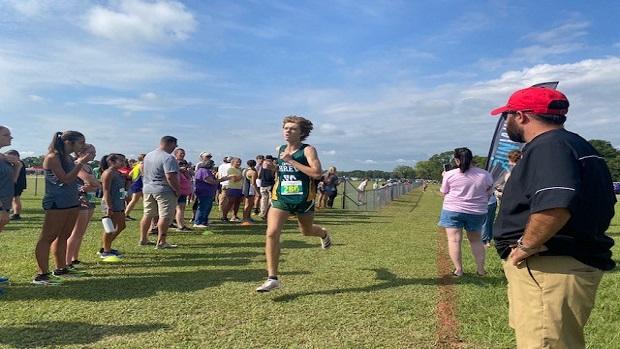 SHREVE'S EVAN JOHSON CAME AWAY WITH THE BORD DASH WIN IN PERSONAL RECORD 15:48!

Captain Shreve's Evan Johnson and Parkway's Gabriel Falting have formed a friendship as they have grown up in the Shreveport-Bossier community running against each other. It was only natural for Johnson to join his friend and the rest of the Parkway cross country program, led by Falting's father- Parkway head coach Kent Falting, when he did not have a coach this summer...or teammates to help him prepare for the 2022 season.

That decision paid off Saturday morning as Johnson won the opening race of his season at Parkway's Border Dash with a personal record 15:48.38.

Coming in second, for the second year in a row, was his friend and training partner-Falting, who posted a 16:01.14.

"They (Parkway) have a lot of good guys," Johnson said. "Most of them are fast and Coach Falting knows a lot about running. He helped me get better for those months I was out there. I can dedicate a lot of this success to them."

It wasn't  the first race of the season for Falting, who ran a 5K personal record of 16:14 . at The Opener in Clinton, MS during week No. 1 of the Louisiana high school cross country season.

"I wanted to win, but Evan took it out really fast," Falting said. "I started dying out toward the end."

Falting's team, the host Panthers, won the boys division for the eighth consecutive year-a source of pride for the coach. Parkway scored 24 points. Benton was runner with 74 points, and D'Arbonne Woods was third with 93.

"It was really exciting today," Falting said. "We ran in the 5k last week and it's kind of hard to know what that is going to translate into three miles. Gabe is our No.1 guy all year and last year as well, but watching Andrew Kent finish within ten seconds of him. Watching Ben Ruliffson run sub 17 out of nowhere. Six guys in the top ten. It was insane today. We are super excited. Super impressed."

And there is good reason to be when seeing the improvement the runners have since last year's race. Last year, Falting was the only Parkway runner to run under 17 minutes. This year, there are five members of the team in the Sub 17 Club.