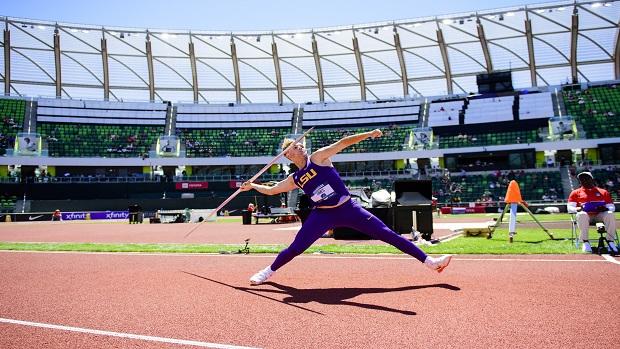 LSU FRESHMAN JAVELIN THROWER JACKSON RIMES COMPETES IN THE US U20 MEET!

LSU freshman javelin thrower Jackson Rimes' first season as a Tiger has been a roller coaster. The ride has stopped, giving the former Catholic Bear a chance to catch his breath. And his throwing arm is thankful.

Rimes finished second at the US U20 Championships in Eugene, Oregon earlier this summer with a throw of just over 202 feet. While the distance is not what he wanted, Rimes was thankful to qualify and be a part of the championship meet.

"It was an amazing experience," Rimes said. "I was disappointed right after it because I didn't throw the distance I wanted to, it was still an incredible opportunity."

Rimese missed the qualifying mark for the World U20 Championships, which will be held in Cali, Columbia this week. The qualifying standard in the men's javelin is 69 meters.

Rimes has a season best of 67 meters, which he threw at a meet in LSU on April 30th.

It was great to get off a big throw after sitting out with a hyperextended knee, which he suffered in March at his first meet of the year.

Even though it has been a roller coaster ride, Rimes has no regrets after his first year as an LSU Tiger.

"I was really happy about that throw and being able to have it come at the end of my freshmen season, and still have four more years to compete," Rimes, who redshirted, said. "I've had some super highs and some super lows."

One thing that has helped Rimes is the support he has had from fellow javelin throwers LSU two-time All-American and school record holder (253'9)Tzuriel Pedigo and Eli Gaughan.

"They have helped with the javelin, but it's not just that," Rimes said. "They have helped me with school. It's a brotherhood. They have taken me under their wing, and I really appreciate their support."

Pedigo, who won the 2021 NCAA National Title as a freshman, will be around a few more years. Gaughan graduated.

The LSU men's javelin group will add another strong arm when school begins in the Fall as Jesuit's Jack Larriviere, who picked up the javelin in February and was the nation's best in the event with an LHSAA state meet composite record of 228-10, joins the program.

Next year, it will be Rimes' turn to show a Larriviere the ropes.

"He has been texting me and asking me questions," Rimes said. "We are excited about him coming to LSU."

"It's been a long year," Rimes said. "I've never had a year where I have thrown from 12 months straight."

The toil hasn't been all physical, there has also been a mental side to retrain his thought process when it comes to the javelin.

"The big thing I've learned this year is that it's not about going out every day and throwing 110%," Rimes said. "Some days you work on other skills and give your body the recovery it needs. Another thing has been to learn how to relax when I'm throwing."

Attending high school during the pandemic prepared Rimes well for the ups and downs of collegiate track and field. He was all-state thrower for Catholic as a sophomore in 2019 before missing the 2020 season due to covid. In 2021, he returned for his senior high school season and was No. 6 in the nation with a best of 208-8.

Rimes, along with Pedigo, and Larriviere, who was the Gatorade High School Boys Track and Field Performer of the Year in 2022 , have the LSU javelin program, and LSU throws Coach Jerry Clayton, sitting in the strong arms race.