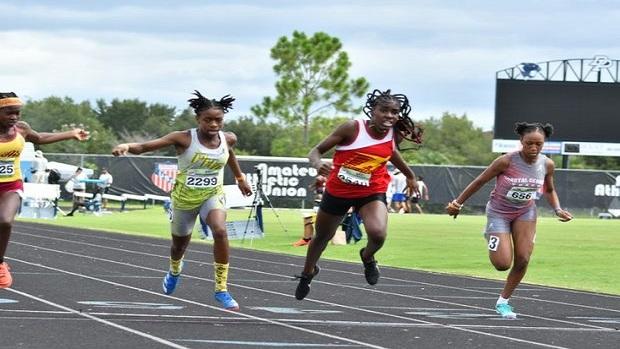 River Cities Track Club coach Mychal Word first saw Aaliyah Brown in his PE class at Mansfield Elementary School 2016. During the warm up lap, Brown took off and not only passed everybody in the class, but she also lapped them.

"The following week, I had her run against the fastest boy in the first grade, and she beat him...bad," Word said. "That's when I realized that she was a special talent."

Word convinced Brown to come out and run for the River Cities Track Club, a summer track club where he coached, although it didn't take much to convince her.

In her second year on the team, 2017, Brown was a part of a River Cities 400m relay which won a national championship in the junior Olympics. The same four girls would win another national title in 2019.

While Brown has won All-American honors in the past, a national championship in an individual event has eluded her until the AAU Club Championships in Orlando, Florida earlier this month. Brown won the 13-year-old girls' 100m (12.56) and finished second in the 200m (25.61).

In the 100m, Brown used a well timed lean at the line to edge out Vanessa Waite of Power House Athletics. In the 200m, it was Waite, who was able to come away with the victory in a time of 24.99.

"She is silently confident and humble," Word said of his national champion. "She doesn't say much, but she works hard."

Going to Orlando, Brown had a good idea that she would be in the mix for a national title.

"I knew from my practices and doing extra work that I would have shot," Brown said.

The extra work Brown put in included squats, sit ups, chin ups, and working on her take offs outside of her team's regular practices.

Before the race, Brown was focused on her "strategy."

"I was thinking about my drive phase, and then at 10 meters bringing my head up," Brown said.

At the end of the race, she didn't know if she had won or not.

"For a second, I thought I came in second," Brown said. "When they called my name, that's when I got excited."

When she saw Word after the race, he congratulated her.

This is her first individual national title, and the feeling along with that accomplishment was a different  feeling for Brown.

"Yeah, I was like 'dang!'" Brown said. "It's different. Usually, I'm celebrating with teammates on the relay. It felt good that all the hard work paid off."

After her national championship in the 100m, Brown returned in the 200 and finished runner-up.

After the discipline Brown has shown during the middle school and summer track seasons, she is glad to have some extra time and be able to enjoy some of the "snacks" she has missed out on for the past several months.