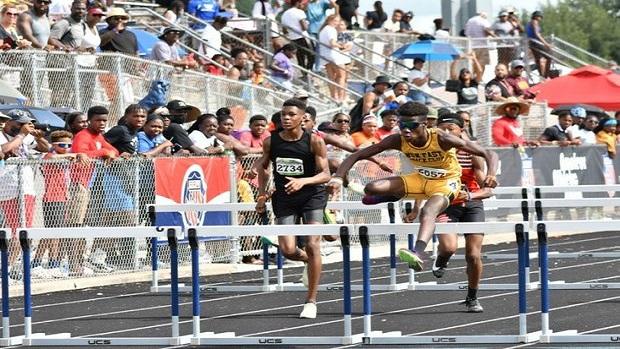 ALL EYES WERE ON FAYDEN BROWN AS HE SPRINTS TO THE FIRST OF THREE NATIONAL TITLES!

When Run Fast Track Club's head coach Jessie Stanley suggested to Fayden Brown that he would be hurdling this year, the 13-year old was "shocked."

When the summer started, Brown expected to continue as a sprinter in the 100, 200, and 400, but Stanley had other plans.

Those plans paid off just over a week ago when the rising eighth grader from Baton Rouge's Central Middle School won three national titles in the 100 hurdles, 200 hurdles, and 100 meters at the AAU Club Championships in Orlando, Florida.

Brown's first hurdle race came earlier this summer at the AAU Region 11 Qualifier in Hammond, Louisiana. When he competed in the 200 hurdles at that meet, Brown was excited about his chances in the hurdle events.

"I was excited because I ran a 26 and I was close to breaking the meet record," Brown.

Close to breaking the championship record in his first hurdles race. Wow.

But the triple gold performance at the AAU Club Championship was almost derailed before it ever got going.

On Wednesday, July 13th, competing in the 100 hurdles in his first national meet meet. Brown stumbled coming off the last hurdle.

"I was coming over that last hurdle and was just trying to break my personal record," Brown said. "It made me stumble."

He was able to recover from the misstep and win his first national title.  Even with the stumble, Brown beat South Charlotte Charger's Jalen Munroe by over half a second. Brown finished with a time of 14.43. Munroe finsished in 15.05.

The following day, Brown would add two more national titles to his resume.

Despite his three gold medals, it took some psychology from a "track mom" to get him to redirect his thought process-even before his first event.

That piece of advice paid off, even after his first national title in the 100 hurdles.

In the 100 meters, Brown's final of three national titles, he found himself in a tight battle with Golden Army's Lee Prince Jr..

"He was holding his top end speed and I knew that it would take a great lean to beat him," Brown said.

That is exactly what Brown executed at just the right time in order to beat Prince. While both were given a time of 11.76. Adkins Track Timing had Brown beating Prince by .003.