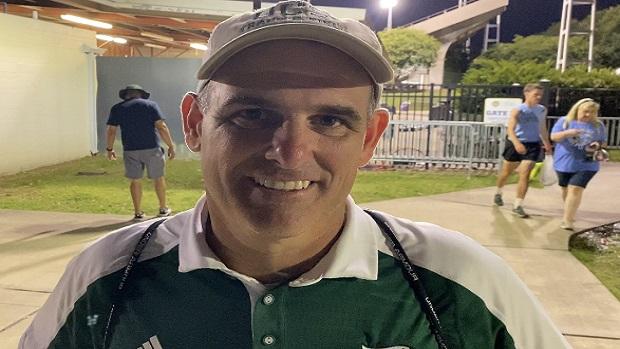 OCS's STEVEN FITZHUGH IS ALL SMILES AFTER HIS EAGLES SWEPT THE LHSAA CLASS 1A STATE MEET!

Almost two months after his Ouachita Christian boys track and field team put on one of the most dominating performances in LHSAA State Meet history, OCS head coach Steven Fitzhugh has been named Louisiana Boys Track & Field Coach of the year by the U.S. Track & Field Cross Country Coaches Association.

Fitzhugh's Eagles shattered their own record of 124 points, which was set in 2021, by scoring 163 points.

"Well, it means I coached a great bunch of kids who love competing with each other, love representing their school, and use the gifts that God has given them to the best of their ability," Fitzhugh said.

The OCS girls also won the LHSAA Class 1A State Championship. It was the second year in a row the Eagles have swept titles in both the boys and the girls divisions.

Four years ago, when Fitzhugh was coaching the junior high team, he drove 10 boys and 10 girls down to the LHSAA State Meet to show them what they were shooting for.

"We talked about dreaming about when they would get the opportunity to go to Bernie Moore and compete for a state championship," Fitzhugh said.

Those dreams became a reality for the OCS Track & Field Eagles.

"I have coaches tell me that they have a problem getting their kids to practice," Fitzhugh said. "I cannot relate to what they are going through, because I will come up on a Saturday and find them at the track after a meet on Friday. I have to tell them to go home and let their body rest."

When Fitzhugh was the junior high coach taking the Eagles on a field trip to the state meet, Daniel Bristo was the OCS head coach. Bristo was a CECP coach for Fitzhugh this year, coaching the pole vaulters to a 1-2 sweep.

"I tell people that Coach Bristo laid the foundation for our track and field program," Fitzhugh said. "I will call him several times a week during the season and bounce ideas off of him. One of the main things I learned watching him was the attention to detail."

But Bristo isn't the only coach who Fitzhugh credits for the Eagles' success.

"All of my assistant coaches really do a great job," Fitzhugh said. "Because of the detail they put into their jobs, we had state champions this year in the jumps, distance, and throws.

"This award is a great honor," Fitzhugh said. "But, it's a reflection of our kids, their great attitude, and work ethic."

Fitzhugh will be presented with a trophy and his name will go into the running for the USTFCCCA National Coach of the Year award, which will be determined by a panel of experts later this year.