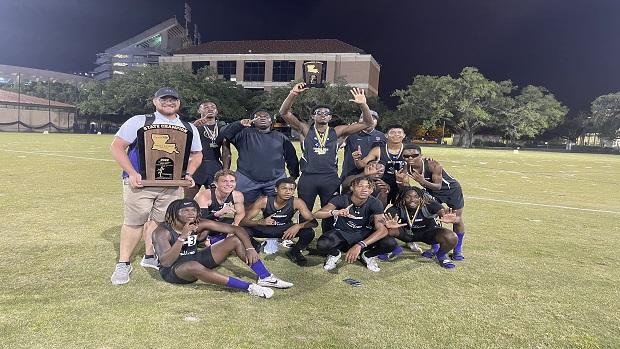 They don't give awards at the end of LHSAA State Track & Field Championships, but if they did-the Simsboro Tigers would have won hands down, just like they did on the track inside of Bernie Moore Stadium Thursday night to win the Class B state championship-scoring 99 points, 29 more than runner up Episcopal of Acadiana.

"You can coach some things," Simsboro head coach Kyle Weiss said, holding the state championship trophy and looking over at his team as they celebrated. "But you cannot coach effort. They put in the work. They've earned the right to celebrate. They cannot dance, but they can run!"

Teammate Chilaydrien Newton was equally as busy. Newton started his day off with a state championship in the triple jump (44-1.5). He moved to the track where he picked up second place finishes in the 110 hurdles (17.44) and 200 (22.90).

Weiss stopped short of singling any one athlete.

"They ALL did a great job," Weiss said. "They all got personal records."

The Tiger's big day started with the javelin, where Daniel Martinez won Simsboro's first state championship with a throw of 147-6.