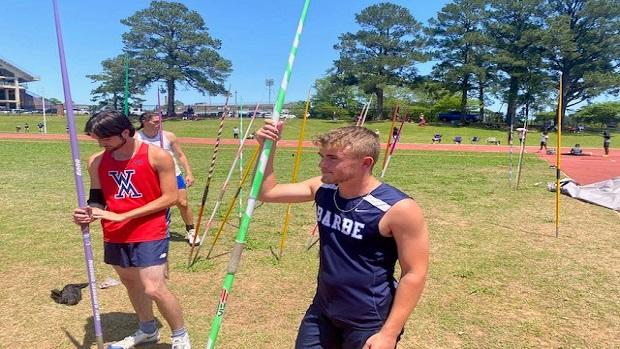 Southwest Louisiana is known for producing big arms, and Leger is just the next young gun in line to pick up the torch and carry it--or throw it--for the area. He showed at the Region I-5A Meet in Natchitoches that he has the ability to throw far when it counts. It was there that he launched a 171-1 to finish in second to North Louisiana's budding javelin star, Ouachita sophomore Charles Smith.

It's going to be a fun to watch these two enjoy their first state championship experience in Bernie Moore Stadium, where they may pick up some pointers from the No. 1 HS javelin thrower in the nation, Jesuit's Jack Larriviere, who comes in as the No. 1 seed with a throw of 220-0. Crawford is on of the youngest in the Jesuit distance group, which is the most talented group of distance runners every assembled at one school in Louisiana Track & Field history. Crawford has put up some gaudy numbers this season.

THE TOP BOYS HS FRESHMEN 1600 METER RUNNERS IN THE NATION!

In the 200m, Wright III is the No. 9 seed and the only sprinter with a seed time about 22.0, but he is a competitor and will rise to the level of competition. Look for this field to pull him to a personal record and look for him to be in the mix to get on the podium.

In the 400m, Wright III has and even better shot. Here is a fun fact about the 5A 400m...of the Top 6 six seeds in the race, all will return next year. There is only one senior-- the No. 4 seed Mason Edwards from Denham Springs.

THE TOP BOYS HS FRESMEN 400 METER RUNNERS IN THE NATION!

Yet another Fighting Wildcat who helped Destrehan sweep district titles last month. Richard is the only freshman in the state to qualify in all four events.

Coach Lynette Matthews said that Marley has the most potential since any Wildcat she has coached since Marley's sister, Jala, was competing for Destrehan in the LHSAA State Championship.

Nothing against older sister, but this future star is on her way to multiple state championships, and an athlete Matthews can build a program around to bring a team title back to Destrehan. Literally came out of nowhere at the regional meet, dropping a huge personal record of 56.09. If she can bring the same energy to Bernie Moore Stadium, look for her to be standing on the podium when it is all said and done. She is seeded No. 2, sandwiched between the No. 1 see, Scotlandville's Layden Jack (55.80) and the veteran, Ruston's LA Jada Williams (56.24), who is the defending champion (54.02) and was also runner-up in the event her freshman year. Has been ranked in the top 10 nationally all year after breaking the 140-0 barrier in early March at the Yellow Jacket Relays in Shreveport. Struggled a bit in regionals, after a personal record at the District 1-5A Meet (144-0).

Finished third in Region I-5A with a 34-9. She also finished third in District 3-5A with a throw of 35-5.5. Despite third place finishes in both district and regionals, she has won six of seven other competitions this year, including the Tioga meet, where she had PR of 37-1.5.

Finished second in the Region I-5A Meet (46.96). Also finished second in the District 3-5A Meet (47.82). If you have to finish second to someone, Lafayette's Courtney Wiltz is as good as any. Look for Trahan to give her district rival a run for her money at state. She is seed No. 4 at state, but the thing she has going for her is that the 300 hurdles will be the only race she has to concentrate on. Others will have their hands full with other races.

Qualified out of the Region 3-5A 3200 meters. The experience gained at thet state meet this year will be of value in the coming years as she drops time and becomes one of the state's best.

The No. 9 seed in a loaded girls' javelin field. Qualified out of Region III with a 101-9. Anything can happen in this event. Just qualifying for state in this events speaks volumes.

Qualified out of Region III with a 51.46. The No. 9 seed, but should benefit from a young, loaded field.