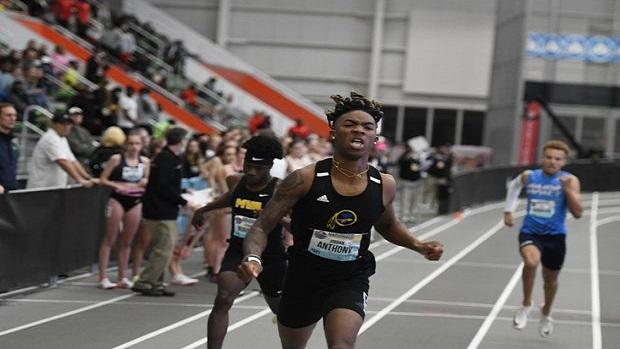 Back in March of 1999, they called him "White Lightening." When you break the national high school record in the 60 meters, like Owensboro's Casey Combest did earlier that year, you can be called anything you want.

Meet director, Steve Schoenewald, who just completed his 29th Mobile meet last Saturday, has quite the collection of officials and volunteers, who collectively make the meet one of the best in the South.

Schoenwald's clerk of course in 1999 was the same clerk he had last Saturday- Mandeville's Mike Cambre.

"He was five foot nothing," Cambre said. "And he was bald headed, but he had this persona about him that I will never forget. He was cool as a cucumber."

As Cambre was lining the sprinters up to be introduced before 100 meters. Combest had a question for Cambre.

"How many state champions do you have in this race?," Combest asked.

Cambre, who had done his homework, knew the answer.

"All of them," Cambre replied.

"That's their ass," Combest said as he walked to the line to set his blocks.

There was a false start from one of Combest's opponents, a bit too anxious to get a fast start against arguably the fastest sprinter in the history of high school track and field. The rest of the load field seemed a bit jittery as well. Not Combest.

As they all walked back behind their blocks, Cambre kept an eye on Combest. The sprinters started going through their pre-race routines. Combest looked at each of his competitors.

"Then he jumped up in the air, you know like they do before the race, but this was different," Cambre said. "I swear I've never seen anyone jump that high in my whole life."

Cambre left his normal position, behind the starting line, and went to the infield to watch the race with  Mandeville High School head coach Bob Woodworth.

"You could hear a pin drop in that place," Cambre said. "Bob said 'look Mike' and pointed to his arm where the hairs were standing up. It was electric!"

Combest came out of the blocks and obliterated the field, setting the meet record with time of 10.34.

While there weren't as many state champions in the race on Saturday-or fans in the stands -there was still anticipation when nation's fastest sprinter, Tylertown's Jordan Anthony, wowed the track and field fans at the meet, now called the Mobile Challenge of Champions.

And 23 years after Combest, Mike Cambre was there at his normal clerking post last Saturday, but there are no Jordan Anthony stories...before the race. Tylertown (MS)'s Anthony did, however, rewrite the Challenge of Champion record books.

First, Anthony ran into a headwind, but still demolished Combest's 100m record by running a 10.25.

What about beating the meet record set by a legendary high school sprinter, like Combest?

"It feels good," Anthony said. "I'm grateful, humble. I'm thankful to God for letting me be here and have this talent he blessed me with, to be honest."

Before breaking the record, Anthony warmed up by running the anchor leg on Tylertown's winning 400 meter relay. When asked about the relay, Anthony broke it down naming each person on the relay and even went so far to give their grade. Anthony believed that the 400 meter relay helped warm him up for the 100.

"I'm grateful, humble. I'm thankful to God for letting me be here and have this talent he blessed me with, to be honest,"

"I think all track meets should start with the 4x1 first and not the 100," Anthony said.

Anthony wasn't done yet. He cruised to yet another  meet record in the 200 meters, running 20.60. His main competition was his teammate, Jeremiah Dillon, who ran a 21.31. Dillon also finished second to his  teammate in the 100 meters.

Combest and Anthony have more in common than holding sprint records at the Mobile invitational track meet.

Combest, who grew up in the small town of Owensboro, Kentucky, wanted to attend the University of Kentucky, but had to settle for Wallace State Community College in Hanceville, Al. because he didn't have the ACT score to attend the flagship school in the commonwealth.

Anthony is from a small town as well. The population in Tylertown, Mississippi, which is just a few miles from the Louisiana line, is smaller than the enrollment at some of the schools of some of his opponents on Saturday.

Unlike Combest, Anthony signed with the Big Blue Nation during the early signing period to be a two-sport (football and track) star for the Wildcats.

"I am very excited," Anthony said about heading to the bluegrass state. "Coach Mark Stoops, that's my boy. Coach Green and Coach Hall, the track and field coaches there are excited for me to get there-especially the fans. The fans can't wait for me to touch down June 1st in Lexington, Kentucky. Go BBN."

Anthony was adamant about why he chose Kentucky.

Before Anthony begins the next chapter of his career, he has some unfinished business to attend to over the last month of his high school track and field career.

TOP 10 HS SPRINTERS IN THE NATION!

Combest's final chapters of his career were not the storybook ending that he-nor anyone else who watched him compete-expected when he ran the 10.34 in Mobile in 1999. He won the 2000 junior college indoor 60 meters, but soon after became homesick.

"I was tired of living in a cornfield," Combest said. "I wanted to go home and make some money."

Combest did make money. He also made enemies with the Owensboro Police Department for the illegal activities he was involved in. It eventually led to jail time for Combest in the summer of 2001.

In 2007, Combest was invited back to Mobile's elite track and field meet to pass out awards.

"He showed up in this outlandish gold zoot suit," Cambre recalled."He loved the attention."

No matter his fashion taste, Combest was a hit among the spectators at the meet. Thinking about the adoring track and field fans on the way home to Kentucky, Combest decided to stage a comeback.

Never afraid of hard work, Combest pushed himself and reached near-peak form. However, his body simply could not withstand the stress of running fast.

But that was then, and this is now. Now, it's Jordan Anthony's turn in the fast lane of high school and soon collegiate sprinting. It's his turn to avoid the hurdles which led to Combest's demise. It's his turn to make the most of the opportunities--and God-given talent-- he has been blessed with.