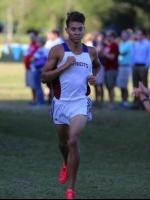 WATCH Devyn Keith Close In 60 Second Last Lap To Win Mi...
Despite being sit on by the field for the first 3 laps that did not stop Keith from closing with a 60 second last lap to hold off a field of runners in a 4:21.36 win in the mile at the Mobile Challeng...

Louisiana Recap for NXN and AAU Nationals...
LA was represented at two major national championships this past weekend....

Louisianians at the NXNS Mudfest!...
Thought state was rough? You have no idea....

Throwback Thursday #7...
In honor of the Catholic High grandaddy of them all this weekend, let's take a look back two years at the same meet....

Performance of the Week 10/3 Poll Results...
Some blazing times this weekend lead a good group of performances that you voted on....

Watch Devyn Keith Battle Eric Coston For Louisiana Stat...
12-time Louisiana state champion Devyn Keith of John Curtis ran 14:30 on Highland Park in Baton Rouge to set the all-time state record, but he could not have done it without Eric Coston pushing the wh...