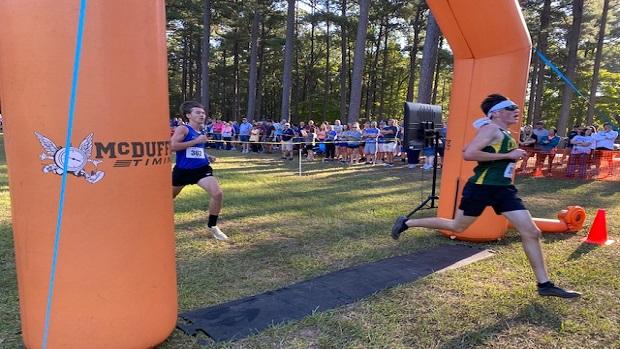 JACKSON BURNEY FINISHES AS THE RUNNER-UP IN THE BOYS DIVISION AT WALLACE MARTIN INV.

MileSplit LA fans will have a tough time deciding who to vote on for MileSplit LA's Boys' Performer of the Week. Here is the list of talented runners voters will choose from...

Brother Martin's Daniel Falk - Was the runner-up at the Mt. Carmel Cub Run in New Orleans' City Park on Saturday morning. Falk's performance, 15:37.42 over three miles, helped the Crusaders to the team title.

Barbe's Joseph Geier - The junior Buc ran a 5K 16:48.24, which was good enough for second place at the McNeese Cowboy Stampede. His performance helped Barbe win the team title.

Calvary's Jackson Burney - The 2022 LHSAA Class 1A state champion in the 800 meters showed his versatility Saturday morning at the Wallace Martin Invitational in Ruston's Lincoln Parish Park. Burney's first first cross country race of the 2022 was a successful one as he ran a 17:00.45 to finish second in the three mile race. Not bad for wide receiver who got a few plays in at wide receiver during the Cavaliers  win over Wossman only hours before on Friday night.

Parkway's Ben Ruliffson - Another freshman in Northwest Louisiana who is quitety making a name for himself. The young Panter has posted a best of 16:43 this season at Parkway's Border Dash. That is the fastest time posted by a Parkway freshman in the last 20 years.