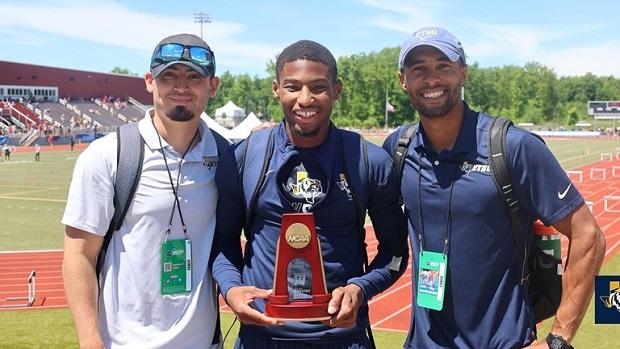 Rangel Miller is all smiles with his coaches after becoming ETBU's first-ever All-American!

Former Bossier Bearkat Rangel Miller became East Texas Baptist University's first-ever track and field All-American earlier this summer by finishing 8th at the Division III NCAA National Championships with a 47.86 in the 400 meters. Miller has come to the conclusion that going the distance is overrated.

As a senior at Bossier, Miller ran cross country to "stay in shape" for basketball. He finished 112th in the LHSAA State Cross Country Meet.

"When I talk to my old coaches and teachers now, they tell me that I should have run track," Miller said. "But, I went to Bossier to play basketball."

Even Miller contends that his experience in running, going from an average distance runner at both the high school and juco level to an all-american sprinter, has been unorthodox.

When he graduated from high school, he moved on to Bossier Parish Parish Community College, where he continued to compete in cross country.

After two years at BPCC, Miller was at a crossroads.

"I didn't have any schools reaching out to me except Centenary College and ETBU's Natalie Bach-Prather," Miller said. "It was a sign from God. And even on my first visit to the ETBU campus I could tell that was where I was called to be."

But that still doesn't explain the transformation from distance runner to a long sprinter.

"Coach Zach Richardson," Miller said. "He said 'Dude, you're a 400 meter runner. He was the first coach to see it in me. To see what I was capable of becoming. I give him a lot of credit. Honestly, I didn't believe him at first."

It took "a ton" of trust on Miller's part to listen and follow the plan of his new coach.

"I decided that if he believes in me, then I am going to believe in him and believe in myself," Miller said.

"Leaving that meet and that environment, it was a great feeling to know that we were so close to be where we wanted to be," Miller said. "If we could do that with a little training in the 400 meters, who knows how far we can go if we sell out."

Miller did that just. He took two weeks off, and then began to hit it hard during the summer of 2021.

"I just thought about the sacrifices my family and coaches have made for me. I thought about ETBU and the resources they have given me. To be on that podium, not for me, but to be used by God..for His Glory.... What a blessing it was for me.,"

There was a hiccup in November as Miller suffered an injury to his meniscus, but he "toughed it out", opting to have surgery after the 2022 season.

Miller ran his personal best of 47.2 at the conference meet. His second fastest time of his career came in the prelims at the 2022 Division III National Championships.

While his 47.86 in the finals was not the time he wanted, it was good enough to earn him the title he had worked hard to attain- All-American.

What was he thinking as he crossed the finish line?

"Blessed," Miller said. "I just thought about the sacrifices my family and my coaches have made. I thought about my ETBU and the resources they have given me. To be on that podium, not for my own gain, but to be used by God to show his Glory. What a blessing it was for me."

Miller is not the first All-American in the family. His uncle, Hollis Conway, is a two-time Olympic medalist and a former American record holder in the high jump. Conway called Miller every morning when he was at the Division III National Meet.

"It was simple motivation," Miller said. "But it was so simple that he truly helped to put my mind at ease. He told me that I belong, and to treat it like just another race. Compete, and beat the man in front of you, but don't get worked up. His words meant so much."

As planned, Miller had surgery after the season to repair his meniscus. This summer he has been busy in rehab mode.

"The recovery is going great," Miller said. "Oschner and The Edge physical therapy have been great. Justin Boyd has done a great job in pushing me and I'm actually ahead of schedule."

The Tigers first All-American in school history, who started out as an average cross country runner in high school, isn't ready to cross the finish line of his collegiate career just yet. But, when he does, you can bet that Miller will be sprinting.