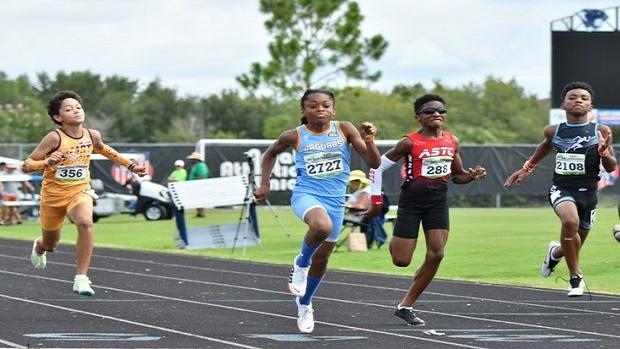 "I knew he had the fastest time on paper going into it," Boyd said. "He has been improving and dropping some great times throughout the summer, especially for just picking up the event."

Mckenzie made it look easy, cruising to a 13.03 and breaking a smile as he crossed the finish line, almost a half second before his closest competition, Space Coast Striders Track Club's Mychael Pulley, who finished with a 13.40.

He returned to take the 100m national title with a time of 12.91. This race was tighter as Austin Striders Track Club's Bryce Anderson, who finished with a 13.18, battled Mckenzie to the end.

In the 200 meters, Mckenzie battled Aiden Cotton, representing the Cotton Club Posse, coming up just a bit short. Mckenzie finished with a 25.93, while Cotton won the event in 25.66.

But the two gold and one silver was not all of the hardware Mckenzie hauled home to Baton Rouge. He was the high point award winner for 11-year-old boys and won a trophy for his efforts.

"It actually did surprise me about the high point award," Boyd said. "I think this is the first time we have had an athlete from the team to win the high point trophy."

"He loves to practice," Boyd said. "Sometimes I will show up at the track and Mikey is already out there warming up. He is usually the first one there. He is a great kid, and a great kid to coach."

Another surprise for Boyd was the girls 11-12 4x400m relay. Missing two of the regular legs, who were not able to the make the trip, it was next girl up for the Jaguars.

Bailey Sampson, Reagan McKenzie, who is Michael's sister, Summer Brown, and Autumn Brown made the most of it by winning the relay in 4:20.42. The race was not without drama as the Jaguars edged out Coastal Georgia Track Team's 4:20.88 performance.

"It's the first time that group has run together since the indoor season," Boyd said. "We thought they were capable of a top 8 finish, but they went out there and ran their hearts out. We are extremely proud of what they accomplished."

Other Jaguars with notable performances at the AAU Club Championships include Jaivyn Washington. Washington won all-american honors in three events in the 14-year old boys' division by finishing second in the triple jump (38-7), fourth in the 200m (26.64), and fifth in the 100h (14.35).

Washington's teammate in the 14-year-old boys' division, Raheem Gray had three top five performances. Gray finished third in the javelin (92-4), and had a pair of fifth place performances in the shot put (39-3.25) and discus (101-4).

Next up for Mckenzie and his SBR Jaguar teammates will be the AAU Junior Olympics in Greensboro, North Carolina. The meet can be WATCHED LIVE on MileSplit, beginning Saturday, July 30th.