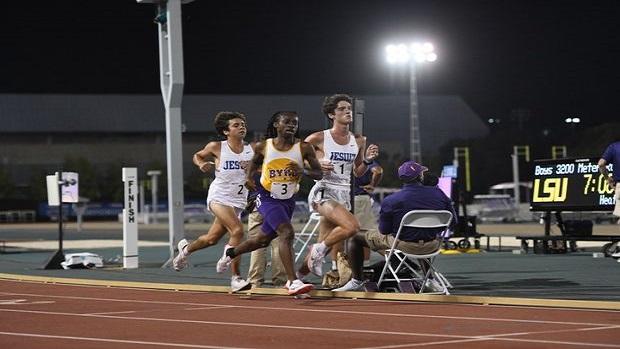 Shark Week usually comes on the Discovery Channel in July, but for Jesuit distance runners junior Jack DesRoches and sophomore Lucas Sampedro it came early for the Blue Jays when their distance coach, Cullen Doody, gave them the plan for last Saturday's LHSAA Class 5A 3200 meters.

"I told Lucas and Jack to run hard from the guy and drag everyone else into the deep water," Doody said. "I figured that was the best chance we had to get both Jack and Lucas on the podium. Obviously, we knew most of the runners in the field. It was basically, go hard and force people to decide if they want to run at a pace they never have before."

Both Blue Jay runners-or "sharks"--liked the plan, so much so that they continued the "drag them into the deep water" talk throughout the week.

Although it was "totally opposite" of what they expected their coach to say.

"He is usually telling us not to make any bold moves at the start of a race," DesRoches said. "You can usually find us in the back of the pack at the start, running conservatively."

But it made sense. A slow pace leaves too much to chance, and gives opportunities to runners who do not possess the level of endurance the Blue Jays are blessed with.

If Bernie Moore Stadium was to be the Shark Tank, it was certainly familiar waters for DesRoches, who was the 2021 defending 3200 meter state champion in the event. Sampedro was familiar as well, finishing seventh a year ago.

The '21 3200 meter win gave DesRoches, who outkicked the competition in what started out as an insufferably slow two-mile race, gained confidence heading into his junior year of high school.

"It changed my mindset," DesRoches said. "I knew that I was one of the top distance runners in Louisiana, and so I started thinking about what I had to do to become one of the best in the nation."

He remembers the race well.

"I vividly remember watching replays of that race and being amazed at how fast Trent Wells closed over that last 100 meters. His max speed on that last 100 meters was insane," DesRoches said. "If the race had been 50 more meters, he would have beaten me."

When they lined up on Saturday night, Wells, the senior from C.E. Byrd High School was right there next to DesRoches and Sampedro in the No. 3 position.

But despite Wells' runner-up finish in 2021, the Jesuit distance thought it would be another competitor to give them a run for their money.

"It was definitely Rhen Langley (of Zachary)," Sampedro said, when asked who they thought would be their toughest competition. "We remembered what he did at the West Feliciana Meet. He ran 9:14."

Sharks can smell blood in the water from miles away. DesRoches and Sampedro were  in different cars, miles away from Bernie Moore Stadium when Wells and Langley were running in the 1600 meters with temperatures in the mid 90s earlier in the meet. Wells ran a 4:23.19 and finished fourth. Langley prevented Jesuit from going 1-2 by finishing second (4:21). Could it be to their advantage that one of their competitors would not be fresh when it came time for the penultimate race of the meet?

As DesRoches and Sampedro made their way to Bernie Moore, they watched their teammate Michael Vocke successfully defend his 1600 state title and Jesuit freshman Leland Crawford finished third.

They also watched an interview of their two teammates on MileSplit Louisiana. At the end of the interview. Vocke was asked what he anticipated in the 3200 meters later that night.

"I think it's going to be something similar to last year," Vocke said. "They went out slow. I think Jack is going to stay right up there, like I did in my race, and then the last lap or two he is going to make his move. Lucas will try to keep up, but he doesn't have the leg speed."

When Jack DesRoches heard the interview he was in disbelief.

"I don't know what he was thinking," DesRoches said. "Obviously, he wasn't thinking. I'll blame the heat for his brutally unfiltered assessment."

Lucas Sampedro heard the interview too.

"I just took it as 'I'm going to prove him wrong.'" Sampedro, who gave Vocke a hard time about making the comment, said.

"He kept saying 'I ran slow', and I tried to reassure him that he did not run as poorly as he thought he did," C.E. Byrd head coach Juan Plaza said. "He was a victim of a slow pace, and-typically-he doesn't respond well in those types of races. But it hurt everyone in the field, most of whom were seven seconds off their PR. Trent was only five seconds off his PR."

Plaza told Wells that he would have to run an honest race in the 3200 meters. He couldn't afford to get caught up in another race with a slow pace.

Wells, who is a perfectionist, has autism. While he was frustrated about not running the time he wanted in the 1600m, he was able to put that behind him.  Wells understood the assignment Saturday night. He was a senior. This was his last race. He knew he had to lay it all on the line.

As vicious as they are, even sharks can become victims of poor timing and illness.

DesRoches had started to feel under the weather early in the week.

"It started Tuesday, but it wasn't a real big deal," DesRoches said. "On Wednesday, I was really knocked out and I got a steroid shot."

The shot did not help. On Thursday, DesRoches took a Covid test.

"It came back negative," DesRoches said. "I was surprised because that's what I thought I had."

As the race started, the sharks were trying to hit the 70s pace their coach wanted. Instead they were hitting 71s, but the plan seemed to be working.

Sampedro could hear his coach, who was standing outside the gate in the northwest corner of the stadium. His wife was outside on the northeast corner.

As Cullen Doody watched, he could tell by their body language they were not feeling great.

The opposite was true for Plaza as he watched wells for the first row of the second level of Bernie Moore Stadium.

"He was right there behind them during the first part of the race," Plaza said. "I thought his body language was better than the Jesuit runners. I thought he would have a chance.

After three laps, Lucas Sampedro moved around DesRoches during the fourth lap to lead the race for one lap before falling.

Wells sat on the sharks until lap seven when he made his moved.

"I was definitely surprised," DesRoches said of Wells passing him to take the lead. "Honestly, in that moment, I didn't feel competitive."

As Wells made the move with two laps remaining, he worried that he had made his move too soon.

"I was worried about," Wells said. "But I think that's what helped me run harder and have a longer kick."

When the bell lap sounded, it must have triggered something in DesRoches.

"After we ran the curve to start the bell lap, I had a little thought to push one more time," DesRoches said. "I tried again to see if I could catch him. It killed me. He matched my effort and then showed more speed. I had nothing left in me after that."

Meanwhile, Wells found another gear in his escape from the sharks.

"I really was thinking like 'they're probably speeding up on this lap, so perhaps I should speed up too. At the last 300, I did hear footsteps so that helped me speed up more," Wells said.

As Wells came screaming down the final straight away, Plaza was screaming and jumping up and down.

"Go Trent!," Plaza yelled as his son, Jonathan recorded the moment on his phone.

For the sharks, it was the one that got away.

"I'm not mad that I lost," DesRoches said."Trent Wells put in the work, and he wanted it. I'm just upset that I wasn't 100%. I was unlucky to get sick. I'm just glad I'm a junior. It's not a huge deal. If I was a senior I would be devastated."

After the race, DesRoches spoke to his coach.

"It took me a while to recover after the race," DesRoches said. "When I talked to the coach he did a really good job of putting it in perspective. He asked me if a year ago I would have been able to run the time that I did had I been sick. The answer is absolutely not. I couldn't have done that. He is always good at being rational and speaking truth in those moments when emotions can take a violent swing. He basically knocked some sense into me and reminded me that I'm a junior."

Besides his coach, DesRoches has a great support system within his family.

"I'm so appreciative of my mom and dad," DesRoches said. "My mom is always going to tell me how great I did, no matter if I did great or not. For her, it's the effort and not the result that matters. My dad understands my thought process. They both give me relentless support and are so proud of what I have accomplished. My brother goes to LSU. He plays rugby. He was there Saturday night and thought it was exciting and fun to watch. It was nice to have him there."

For Lea Wells, Trent's mother, it was an early Mother's Day present to see and hug her son after the 3200. When Trent was diagnosed with autism, she spent hundreds of hours researching and keeping journals about Trent. This information was vital to Trent's doctor, who was helping the family navigate through the difficult time.

Mr. Wells almost pulled his son out of track and field after watching his son's interactions with other athletes on the team at Trent's first track practice. There were a few kids on the team making fun of how Trent performed the drills and his intensity.

In November, on his 18th birthday, Wells signed a letter of intent with Savannah College of Art & Design. Now, he completes his high school career with a state championship victory against the defending champion in his last race with a 23 second personal record.

According to Plaza, of the top 50 3200 meter runners in the state, only three had personal records at the LHSAA State Championships. The conditions were simply too brutal, which makes what Wells accomplished even more amazing.

"The planets were aligned for him," Plaza said of Wells's race. "He had it in him, he just needed the right conditions."

DesRoches and Sampedro did not really talk about the race until two days after, on Monday afternoon. Even then, it was more of DesRoches checking in on his teammate. Sampedro was at practice. DesRoches did not practice due to his illness, which seemed to be a bit of a setback, but did attend Monday's practice to check on his teammate.

The Jesuit Blue Jays will now get a bit of a break before beginning summer training.