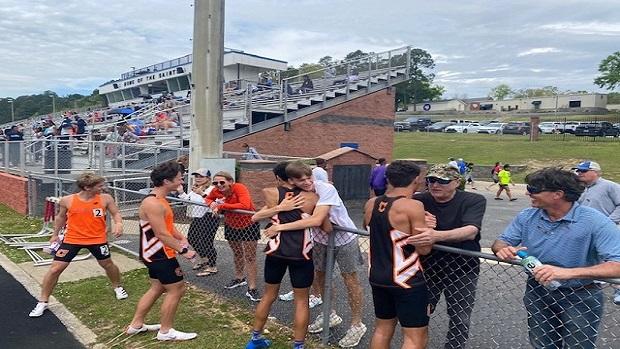 CATHOLIC'S 4X800 CELEBRATES WITH FAMILY AND TEAMMATES AT CHALLENGE OF CHAMPIONS

While Tylertown sprinter Jordan Anthony put on a show by breaking two of the Mobile Challenge of Champions records on Saturday, it was the Catholic 4x800 relay who got the show started by surpassing what anyone-including their coach- thought possible in the meet's first event.

Going into the meet, Catholic distance coach Tre' Hendry was hoping  Steven Mayer, Daniel Sullivan, Harrison Thomas, and Winston Decuir would break Catholic's school record of 7:53. But the team looked up the meet record and found it was only one second faster. That's what the Catholic High Bears had on their mind as Steven Mayer stepped to the line at E.E. Delaney Stadium on the campus of St. Paul's Episcopal School.

When Winston Decuir sprinted across the finish line, uncontested for the victory, the scoreboard showed their time-7:47.77.

CATHOLIC'S RECORD-BREAKING 4X8 TALKS ABOUT THEIR PERFORMANCE IN MOBILE,AL!

Hendry had made a deal with Sullivan and Thomas, who were scheduled to run in the 1600 meters later in the meet. Break 7:50 and the boys wouldn't have to run the 1600, and could head back to get ready for Catholic's prom.

"I was joking with two of the seniors before and said,' if ya'll break 7:50 and we win the race, ya'll can leave and you don't have to run the mile'," Hendry said. "I never thought they'd do it, so now I've got to go back on my word, and I told them we're staying and running the mile."

After running the No. 2 time in the nation, the boys from Catholic didn't mind hanging around a little longer.

Senior Steven Mayer got it started with a 1:57.4 split.

Next, it was Sullivan.

"Steven gave me a nice lead going into my leg, so I knew I couldn't let my team down," Sullivan said. "I knew I had to give it my all and get out as much as I could."

While Sullivan, who ran a 1:56.9 split,  was being challenged by host St. Paul's second leg, he was able to pull away over the last 400 meters of his leg and give Thomas a comfortable lead going into the third stage of the race.

"They gave me a great lead,"Thomas said. "It was pretty easy sticking with that lead and I was just basing my time off splits and trying to get faster with those."

Thomas was happy with his split, which came in just under 2:00.

Decuir, running without the benefit of someone pushing him, ran a split in the 1:54 range.

"They all put me in first. I couldn't let them down," Decuir said."We weren't chasing people, we were chasing records. That's how we roll. That's how we do."

Decuir is the only underclassmen on the team. Mayar, Sullivan, and Thomas are seniors, cherishing every second of an amazing senior year at Catholic High.

"It's awesome to get to be a senior," Sullivan said. "This is our last year so we are running for each other. We are running for our team. To have this group of guys, it's just so special."

Mayer credited their coach for helping the team to get to where they are.

"It couldn't have happened without Coach Tre," Mayer said. "He has put in the work, taken time out of his day, to help us get this good."

After taking a picture with the relay team after the race, Hendry wasted no time in making a phone call to his legendary mentor, Louisiana Sports Hall of Famer Pete Boudreaux.

"It's all because of him," Hendry said. "He means the world to me, and he is the reason I do this, and I want to keep doing it-because of him. I was excited to get to talk to him after."

As far as what his team accomplished?

"I just can't believe it," Hendry said. "It was incredible."

It was indeed incredible, and set the tone for the Catholic Bears team, who weren't finished in Mobile just yet.

While Sullivan and Thomas were running the 1600, wishing they were west bound on I-10 instead, Catholic's Grant Griffin was standing behind the podium after the boys' shot put and cheering them on as they ran by.

Griffin came into the meet with a personal best of 55-9.75, two feet further than any other shot putter in the state. He left Mobile with a new PR of 57-1.25, five feet better than the Challenge of Champions runner-up.

"I got here, had a good warm up, talked to my coach, I knew what we needed to do," Griffin said. "There were a couple of problems I needed to execute, keep my elbow up, spin in the middle."

Griffin had a sub-par effort on his first attempt, but Catholic Head Coach Rodney Brown, who was an All-American discus thrower at LSU, and Catholic throws coach, Don Hood,  came to the rescue.

"He told me what I needed to fix, and I fixed it," Griffin said.

But like his counterparts in the 4x800, Griffin had other things on his mind when he accepted the gold medal and the Mobile Challenge of Champions T-shirt. Griffin had to hurry and get back to Baton Rouge for prom as well.

"My girlfriend just called me," Griffin said. "She told me I better not be late."

The final Catholic winner on the day was junior Louis Rudge in the 300 hurdles. Rudge held off Bayside(Alabama's) Patrick Daves, who won the 110 hurdles earlier in the meet, by running a 38.47. While not quite as fast at the 38.31 he ran at the Texas Relays a week before, Rudge was still happy about getting the win.

"It felt really good," Rudge said. "I had a pretty clean race. I got a little jumpy on some of the hurdles.I can go work on that. I wanted a little better, but I still won, so I'm going to take it.

Earlier in the mett, Rudge finished fourth in the 110 hurdles with a time of 14.49, just two hundreths of a second off of his personal record 14.47 set at the Catholic Tip Off Meet.