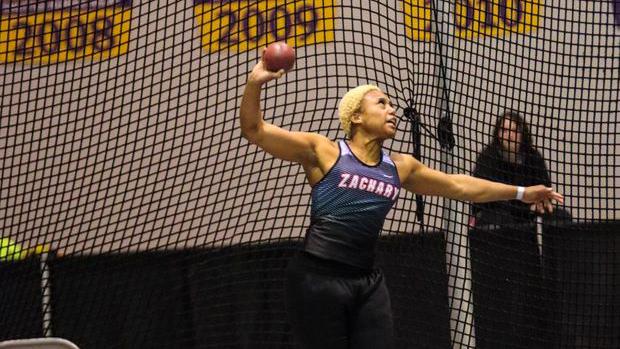 When it comes to excitement at track and field meets, the shot put is not one which usually comes to mind, but it was that event where Louisiana athletes found the most success when it comes to national rankings.

Jackson didn't get the memo that she was the underdog at the LHSAA State Indoor Championships, and she wasn't rattled by the fact that she needed a big throw on her last attempt to win a state championship. That's exactly what happened as Jackson uncorked a 42-3 to move past Guy and to the top of the podium for a state championship. The throw also moved her into the No. 25 spot in the US for the 2022 season.

The future Arkansas Razorback said that winning a state championship in the 60 meters as a senior was just as sweet when she won the same event as a freshman. Her 7.53 this season is good enough to rank No. 20 in the US. She called her last title "bittersweet." She realizes her high school career is coming to a close. Look for her special things from her this outdoor season as she goes out with a bang.

You will not find this future Louisiana Tech Lady Techster on the list of Louisiana returners. That's because she transferred from Coronado High School in Lubbock, Texas where she was one of the best in the Lone Star state. Craig ranks No. 2 in the nation in the high jump with a 5-9.75. The amazing thing about her high jump performance at LSU's Last Chance Qualifier was the fact that she was able to jump the height about 30 minutes after a grueling 400 meter race against two of the best 400 meter runners in the state. Craig, who won an indoor state championship in the long jump (18-4), also has the highest pentathlon total of any female in the nation.

Harris was the track MVP of LSU Last Chance Qualifier. Her effort in the 60 meter hurdles was partially responsible for Harris winning the award. Her best time during the 2022 season was 8.60. That ranks the sophomore as the No. 10 hurdler in the nation.

The LSU signee sailed to new heights in the girls pole vault at the 2022 LHSAA State Indoor Championship. She was won of the first state champions crowned on the day, but Prentice's day wasn't done. She went on to finish fourth in the long jump (17-11.25).

While the triple jumper hasn't publicly announced where she will continue her career, some lucky jumps coach at the next level is going to get a steal. Gabriel, who finished second in the Division I long jump (18-1.75) left no doubt in the triple jump, where she had the best jump (40-6.50) by over three feet. She saved her best jump of the season for her last indoor meet. The jump was good enough for No. 13 in the US.

The Lady Hornets 800 relay team was nationally ranked from their first race of the 2022 indoor season to their last. And it seemed that every time they ran, their time continued to drop. It doesn't hurt when you consider these girls have been running together in summer track long before they began competing in high school. It also doesn't hurt to have two of the fastest girls in the state of Louisiana in Sade Gray and Fatima Banks. Gray (7.78) finished third in the Division I 60 meters while Banks (7.80)finished fourth. The foursome turned in a best of 1:40.24, which ranked No. 6 in the US.

The Lady Bearcats were pushed by Scotlandville, but they were able to hold on for a state championship win. The team had a best of 3:56.71 which was good enough for No. 14 in the US.