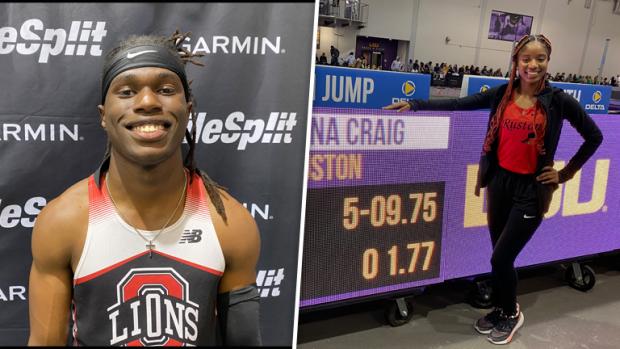 BATON ROUGE, New Orleans -- North Louisiana jumpers had a field day at the LSU Last Chance Qualifier as the best athletes in the state looked to punch their ticket to the LHSAA State Indoor Meet, just a short two weeks away.

The party started in earnest with Ouachita's Jeremy Nelson, the senior walked into the Carl Maddox Fieldhouse with a respectable 46-10.5 PR in the triple jump-ranked No. 18 in the US from his last meet in the building. But, something seemed different on this day.

On his first jump everything clicked and Nelson improved over a foot as the judge called out 48-0. It moved Nelson to US No. 6 and it was hard for the Lion to contain his composure as he hopped back to his triple jump competitors and then continued the celebration over near the high jump waiting area.

"I just had a good week of practice," Nelson said of his opening jump on Saturday. "It just kind of came. I wasn't really expecting it. There were a lot of emotions after. It was really special."

That got his blood pumping, and two jumps later he decided that the track and field fans packed into the arena needed to get their blood pumping as well. He encouraged them to start clapping. They obliged.

Nelson used the adrenaline from his first effort and the crowd's energy to get register a mark of 49-8.25 to move to US No. 3.

"I clapped the crowd up to get me going because I felt good about the first one," Nelson said of his best jump. "I was warm. It felt good, and everything hit."

In moving into the No. 3 spot in the nation, it bumped Ruston's Brandon Green to No. 5.

That's right. The two best triple jumpers in the United States live 30 miles apart along I-20 in northeast Louisiana.

Ruston, which is known for its orchards which produced plump, juicy peaches, and Monroe, known as the location of the first bottled coca-cola in America, may become the triple jump capital of the United States if Nelson and Green have anything to say about it.

While Nelson was working his magic in the triple, Green, who competed and won long jump (22-7.25) earlier in the meet and finished fifth (8.49) in the 60 meter hurdles later in the meet, was watching his District 2-5A foe.

When asked about the triple jump competition at the LHSAA State Indoor Meet, a huge smile broke across Green's face.

"The state meet is going to be one to watch," Green, who signed with Oklahoma University in the early signing period, said. "It's going to be competitive, especially with us being from the same district. We will see each other multiple times, so it's going to be fun."

"I'm ready," Nelson said. "I've been putting in the work. It's going to be one to remember for sure."

Soon after Nelson's amazing performance, there was another jumper from northeast Louisiana who put on a show.

Craig knew that in order to hold off Scotlandville's sophomore sensation and her fellow Lady Bearcat, Jada Williams, in the 400 meters that she was going to have to get out...and she did-leading for 390 meters before both Makeriah Harris and Anderson were able to slip past an exhausted Craig.

Despite finishing third place finish, and the pain, Craig was happy to come away from the race with a personal record.

A trainer from the meet's medical team checked on Craig, who moments after the race as she was curled up on the ground near the podium.

Later, Craig was able to collect herself and make her way over to the high jump where she had a huge jump of 5-9.75, breaking Abigail O'Donoghue's fieldhouse composite 2017 record by a quarter of an inch.

"Everybody told me to get up and walk around after the 400, so I did," Craig said. "When I went over there (to the high jump) I didn't expect to PR because I knew I would be dead from the 400. So, yes, PRing twice today, I am very proud of myself."

The Track MVP on the girls side was Harris, who started her day with her Lady Hornet teammates lowering their own fieldhouse composite record to 1:41.89. Other members included Fatima Banks (fifth, 7.89). and Sade Gray (third, 7.80), both of whom made the finals in the girls 60 meters. The anchor on the team was Whitney Harris.

Makeriah Harris went on from there to win the 400 meters (56.88) and hold off fellow sophomore from Huntington- Demetria Harris- in the finals of the 60 hurdles. Harris ran a 8.94, while the Lady Raider clocked a 8.99.

Harris gave credit to her teammates for her success.

"It's good to have people on the same level as me," Harris said. "They help me throughout the track meet."