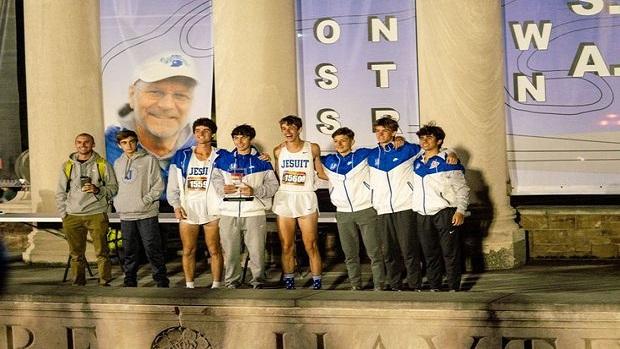 THE BLUE JAYS ALL SMILES AFTER BEING CROWNED CHAMPIONS OF THE NIKE TOWN TWILIGHT!

RESULTS OF THE NIKE TOWN TWILIGHT!

PICTURES OF THE NIKE TOWN TWILIGHT!

VIDEO OF THE NIKE TOWN TWILIGHT!

Those were just a few of the adjectives Jesuit head coach Cullen Doody used to describe the  experience at the Nike Town Twilight Invitational in Terre Haute, Indiana on Saturday night.

"It was probably the greatest sporting event I have ever attended," Dooday said. "As a spectator, fan, athlete, coach. It was epic. A true field of dreams. The atmosphere was fantastice."

The Blue Jays, who scored 97 points to win the invitational, found themselves in an Indiana cornfield after hurricane Ian ripped through the heart of Florida and made its way up the East Coast, causing the cancellation of many cross country races--including the Great American Cross Country Festival in North Carolina.

"Yes, we beat the No. 3 team in the country, but there were six of the top 25 teams in the nation there," Doody said.

"For a Louisiana team to be ranked so high, it's unprecedented. The boys are going to be excited, but when it's all said and done...it's just a ranking, a poll. You still have to go out and run the race... We are happy that our hard work has been acknowledged."
Cullen Doody, Jesuit head coach

For their efforts, the Jesuit Blue Jays have been named the No. 1 team in the nation by MileSplit USA.

"For a Louisiana team to be ranked so high, it's unprecedented," Doody said. "The boys are going to be excited, but when it's all said and done...it's just a ranking, a poll. You still have to go out and run the race. Newbury Park has not run yet, and I'm sure when they do...they will be No. 1, but we are happy that our hard work has been acknowledged."

And they were able to accomplish it without the 2021 LHSAA Class 5A state cross country champion, Michael Vocke, who is recovering from an illness.

"He is dealing with some health issues," Doody said. "It's something that he has had to work through during both his freshman and sophomore seasons. So, we'll see how it goes. We are hoping for the best.

The fact that Blue Jays have been able to overcome the adversity and still able to reach the MileSplit50 No. 1 ranking is one of the things that Doody loves about cross country.

"It's such a great team sport," Doody sport. "It really does take all five guys."

"It wasn't a great race for Leland," Doody said. "I could tell he was hurting. I was screaming at him because I knew we didn't have anyone behind him. He pushed through the pain and won the race for us."

Crawford was rewarded for efforts by winning the Anchor Award, which goes to the best No. 5 guy, but there was so much celebration that Jesuit-somehow-did not pick up the actual award.

"They are going to put it in the mail," Doody said. "I'm hoping it's an actual anchor." JESUIT'S BRADY MULLEN CROSSES THE LINE AT No. 6 AT THE NIKE TOWN TWILIGHT INVITATIONAL

As the Blue Jays took the podium at historic LaVern Gibson, fireworks were going off for the team "all the way from New Orleans, Louisiana."

When the team returned from their cool down it was discovered that they were missing senior Patrick Dowd.

Doody finally found Dowd and asked him what happened.

"I just wanted to soak it all in," Dowd told his coach.

"It was certainly an experience our guys will never forget," Doody said.