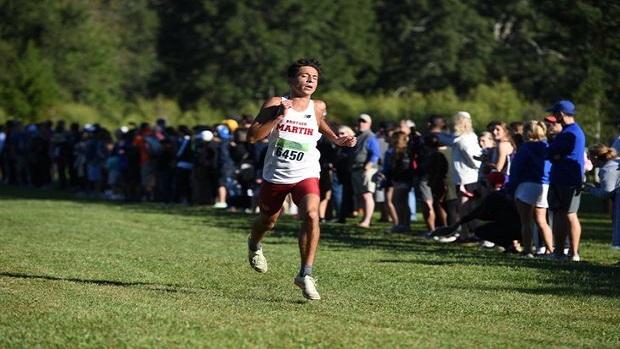 BROTHER MARTIN'S GABRIEL METOYER SPRINTS TO THE FINISH AT THE ST. JOE'S INVITATIONAL!

Brother Martin head coach Drew Haro had a lot to smile about Saturday after the St. Joseph's Cross Country Invitational. His Crusaders won the largest regular season cross country meet of the season, scoring 30 points with an average time of 15:24.

The Crusaders were led by Gabriel Metoyer, who is undefeated this season against runners from Louisiana. Metoyer enjoyed the cooler weather Saturday morning at Baton Rouge's Highland Road Park, dropping his personal record record nearly 20 seconds to 15:11. Metoyer's time leads the state for three mile distance.

"They guys are buying in to what we're talking about," Haro said. "They are running together and working hard. They are staying patient and finding their spot when they can. They executed really well today."

Haro wasn't the only one happy with the Crusaders performance.

"I thought we raced pretty strong," Metoyer said. "Our whole team was together the first two miles. Like our coach said, not to press. We didn't press. We stayed with the pack and made a push at the very to take home the team title."

As well as things went for the Crusaders on Saturday, they have their eyes on a bigger prize next month.

"I want our team to put a fight so we can get the "dub" at state," Metoyer said.

At the beginning of the season, it didn't seem possible that a team from Louisiana could beat the defending LHSAA Class 5A State Champions Jesuit Blue Jays, who are currently No. 4 in the nation but look to move up after beating No. 3 team, Carmel, Saturday night.

However, the 2022 Crusaders are further along than Jesuit was during their histori 2021 season. Below is a comparison of Jesuit's 2021 at the Catholic Invitational, held at Highland Road Park on October 9, 2021, and Brother Martin's performance yesterday on the same course.

Of course on Monday, November 14th at the state meet, Brother Martin will be competing against one of the top three teams in the nation, and the not the 2021 Jesuit team. If the Crusaders stay healthy and continue to improve, it could make for interesting race at the 2022 LHSAA Division I State Cross Country Championships in Natchitoches.