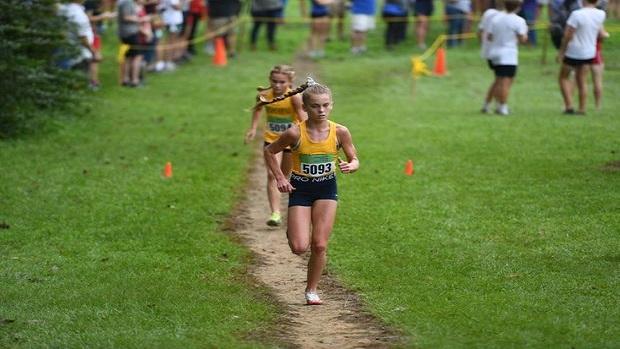 EPISCOPAL'S LUCY CRAMER RUNS HER TO A ROUND TABLE WIN SATURDAY AT ROUND TABLE!

Who is MileSplit Louisiana's Girls' Performer of the Week?

There were several good performances during Week No. 2 of the Louisiana HS XC season. Here are some of the top performers on the girls' side.

BENTON'S ISABELLE RUSSELL - After a disappointing 2021 season hampered by injury and illness, the Benton senior opens the 2022 season healthy and ready to return to the top of the state's rankings, where she was at the end of her sophomore year. Russell finished as the runner-up at the Border Dash on Saturday with a time of 20:15.90. It wasn't what she wanted to run, but she will take it and move on. Russell's performance helped Benton win the team title in a close matchup with host Parkway.

EPISCOPAL'S LUCY CRAMER - This MileSplit Louisiana Future Star burst onto the scene as a seventh grader last year. In 2021, she finished second at the LHSAA Class 2A State Cross Country Meet with a time of 19:17.50. This year, she begins with the first varsity cross country win of her career. Her time? 18:09.37! We would tell you to remember the name, but you are going to be seeing it often. But make sure you don't get her mixed up with Molly Cramer, Lucy's younger sister, who finished just a few seconds behind her on Saturday. Molly is a seventh grader at Episcopal.

ST. JOSEPH'S MICHELLE DAIGLE - No program in the state was a dominant at St. Joseph's Academy last year. The Stickers have been putting in the work over the summer and it has shown as St. Joes has won team titles in the first two weeks of the season, thanks to runners like Daigle. Daigle ran a 18:13.04 on Saturday which was good enough for 3rd place. Even though she finished second in the same invitational a year ago, her times indicates she is ahead of schedule. Her Round Table time last year was 18:53.85.

COMEAUX'S SYA BOLDEN - Zero. That is the number of runners who have beaten Comeaux's Sya Bolden this year. She opened the 2022 season with a win at LCA Knights Invitational No. 1, running a 20:03. This weekend Bolden improved her time by over a minute at the Sargent Memorial. The winning time was 18:55.6.

EDITOR'S NOTE: MileSplit Louisiana is looking for talented photographers, videographers, and writers to help us cover the outstanding athletes in Southwest Louisiana--like Comeaux's Sya Bolden. If you or someone you know is passionate about the sport of cross country and track and field, please reach out to MileSplit Louisiana state editor Jerry Byrd at milesplitlaeditor@gmail.com.