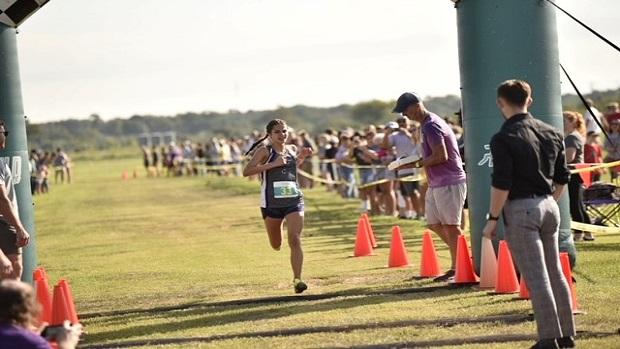 If there were any doubts that Claire Allen could compete with the best high school girls in North Louisiana, the Benton freshman erased those doubts Saturday morning at The Border Dash. Allen won the varsity girls' three mile race with a 19:03.

She also led the Lady Tigers to the team title as Benton scored 45 points to edge out host Parkway (54). Byrd finished third with 64 points.

Allen ran the first race of her high school career last week in San Antonio, TX at the FEAST Patriot Invitational. She finished No. 36 with a 5K time of 19:40, earning her a spot on MileSplit LA's Girls Performer of the Week list.

This week, Allen notched the first win under her belt as she finished ahead of teammate Isabelle Russell, who was the runner up with a 20:15.

With the addition of one of the best freshman runners in the state of Louisiana to an already talented group, Benton head coach Bryson Matthews is having fun as well.

"I am very impressed with our girls' performance today," Matthews said. "Claire and Izzy finished 1-2, and Dominique (Coore) finished in the top ten. We are off to a great start this season with some work to be done."

Russell proved during her sophomore year that-when healthy-she is one of the best in the state of Louisiana. Her junior season, she was plagued with illness and injury. She has gained a new perspective heading into her last year of high school.

"I'm glad to be back," Russell said. "I'm not where I want to be, but all I can do is learn from this to make me even faster."

She hopes to learn from The Border Dash in the same way she learned how to handle adversity during the 2021 cross country season.

"I learned don't give up," Russell said. "It's just one setback. You're going to have all of those throughout life. It's just one little thing that you have to get back up from."

Finishing right behind Russell was Parkway's Cheyenne Olson, who broke the 4K course record at The Opener in Clinton, MS a week ago with a time of 16:49.

Olson enjoyed having new faces on the South Bossier Park course, where she trains with her Panther teammates on a daily basis.

"I know we have some new people out here," Olson said. "Claire Allen, the freshman. She is really good. My goals this year are to keep my time under 20 as much as I can. I want to get back up there with Isabell, like I was last year. You know, get closer to Claire. Just keep improving."