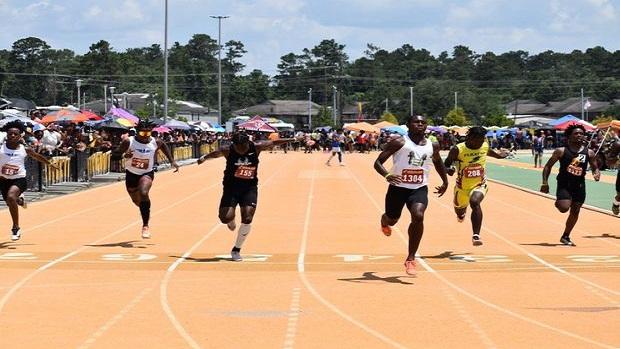 Which LA sprinter has highest finish in 15-16 boys 100m finals at AAU JOs?

Louisiana athletes have put on quite a show at the AAU Junior Olympics in Greensboro, North Carolina this week. You need to look no further than the 15-16 boys 100 meters to see the level of talent in The Boot. Three sprinters have earned All-American honors by qualifying for the finals, which will be held tomorrow beginning at 3:15pm.

Ra'hji Dennis, who has been running fast times all year for the Edna Karr Cougars, has been running this summer with the Trojan Elite Track Club. It has paid off and Dennis turned in a time--10.91-- worthy of the No. 4 seed.

Right behind Dennis at the No. 5 seed is his Trojan Elite Track Club teammate, Jermaine Brown. Brown qualified for the finals with a 10.91.

Last, but not least, is Speed Dyanmics Germain Smith-Mata, who runs for Speed Dynamics. He posted a time of 11.03 to get into the finals as the No. 8 seed.

Which Louisiana sprinter do you think will have the highest finish in tomorrow's AAU Junior Olympic 15-16 boys 100 meter finals?