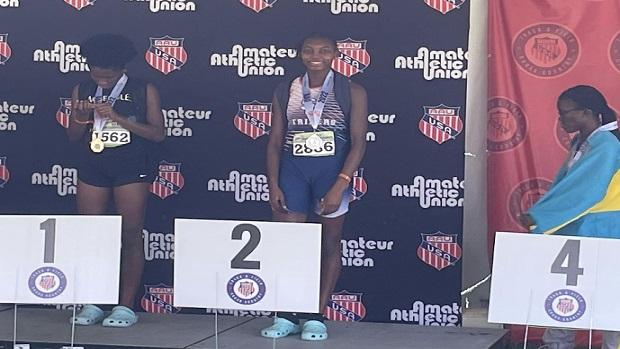 Before Destrehan's Marley Richard went to the AAU Club Championships in Orlando, Florida last week, she had already made a name for herself as one of the bright young stars in the sport. After triple jumping 39-5 and finishing second, she has elevated herself and looks to soon join the elite 40'foot club.

On her fifth attempt, Richard jumped 11.87, moving her into the top three. After extending the second phase on her final attempt, she got out to 12.01 meters, which is 39-5.

"I knew that I was capable of a big jump," Richard said. "I knew if I could run off the board and extend my phases I felt like I could jump close to 40 feet."

Richard credited her sister, Jayla Richard , who recently completed her eligibility at ULM, for coaching her this summer.

Before AAU Club, Richard's previous personal best was in the LHSAA State Meet, where she finished fourth competing for Destrehan with a personal record of 37-10.75.

The winner in the girls triple jump at the State Meet was Central Lafourche's Ke'yona Gabriel, who will begin her collegiate career with Texas Christian University this fall. Gabriel won with a jump of 40-1, after jumping over 41' three consecutive weeks early in the season, including a personal record of 41-8.75 at the E.D. White Cardinal Relays.

Exit Gabriel, who was one of Louisiana's greatest triple jumpers of all-time. Enter Richard, who looks to carry the torch for the next three years, and possibly rewrite the record books.

"Age doesn't really mean anything. I knew coming into high school I wanted to be one of the greatest, and feel like I am capable of reaching that goal."
Marley Richard, Destrehan HS/St. Charles Striders

How does Richard's 39-5 stack up with Gabriel's freshman year? Gabriel's best as a freshman was a wind aided 36-10.5 for an 11th place finish at the 2019 AAU National Junior Olympics.

Besides Gabriel, Ruston's Tina Harris and McMain's Danielle Brown are two of the best triple jumpers in Louisiana History. According to Track & Field News, Harris had a best of 40-10. Brown's best was 40-8.5.

That she is in the conversation to become one of the best triple jumpers in Louisiana history-even after her first year of high school competition-is no surprise to Richard.

"Age doesn't really mean anything," Richard said. "I knew coming into high school that I wanted to be one of the greatest, and feel like I'm capable of reaching that goal."

First things first. Before becoming one of the best in Louisiana history, she will first have to become the best in Louisiana. Going into 2023 Richard will have have at least two formidable opponents, who will be looking to stand on top of the podium at the LHSAA State Indoor and Outdoor meets. St. Joseph's Simone Castelluccio and Covington's Kerrington Baham, who both finished ahead of Richard at the state outdoor meet and will return in 2023.

Louisiana has only had seven girls who have jumped 40' foot or better in the triple jump. In 2023, three more names could increase the membership to that elite club to 10.

Richard is ready for year two.

"I'm looking forward to next year," Richard said. "I want to improve my 200 and get faster, and really work on running off the board in the jumps."