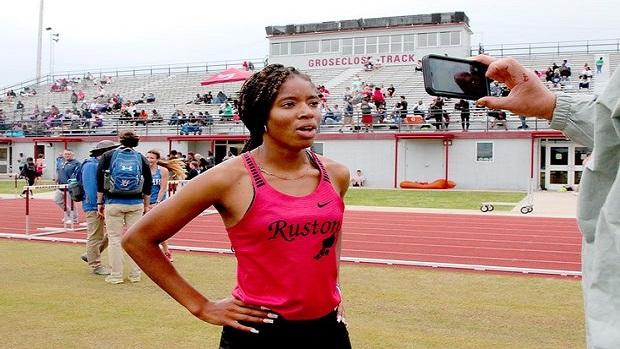 The award, which recognizes not only outstanding athletic excellence, but also high standards of academic achievement and exemplary character demonstrated on and off the field, distinguishes Craig as Louisiana's best high school girls track & field athlete.

The 5-foot-6 senior middle distance talent and heptathlete won the high jump at the Class 5A state meet, adding a fourth-place finish in the 200-meter dash and taking 5th in the 100, lifting the Bearcats to second place as a team. Her personal-best clearance of 5-foot-10 in the high jump this spring was tied for 12th in the nation among prep competitors in 2022.

She capped her career by winning a bronze medal at the USATF U-20 National Championships in the heptathlon, amassing 5,388 points, which ranked as the nation's No. 2 score among prep competitors this spring. That point total also ranks No. 13 in American high school history for girls heptathletes.

An active member of the youth ministry at Christ Temple Baptist Church, Craig has coached elementary schoolage athletes in track and field. "To me, it's not about how you start, but how you conclude your season," said Erik Boal, an editor for DyeStat. "Craig picked it up late and was stronger in the postseason. Her performance at USATF U20s was the best I've seen her look since she first broke 5,000 points back in 2019 at USATF U20s in Florida as a high school freshman."

Craig has maintained a 3.45 weighted GPA in the classroom. She has signed a National Letter of Intent to compete on an athletic scholarship at Louisiana Tech University this fall.

The selection process is administered by the Gatorade Player of the Year Selection Committee, which leverages experts including coaches, scouts, media and others as sources to help evaluate and determine the state winners in each sport.

Gatorade has a long-standing history of serving athlete communities and understands how sports instill valuable lifelong skills on and off the field. Through Gatorade's "Play it Forward" platform, Craig has the opportunity to award a $1,000 grant to a local or national organization of their choosing that helps young athletes realize the benefits of playing sports.

Craig is also eligible to submit a short video explaining why the organization they chose is deserving of one of twelve $10,000 spotlight grants, which will be announced throughout the year. To date, Gatorade Player of the Year winners' grants have totaled more than $3.5 million across more than 1,300 organizations.

Since the program's inception in 1985, Gatorade Player of the Year award recipients have won hundreds of professional and college championships, and many have also turned into pillars in their communities, becoming coaches, business owners and educators.

To learn more about the Gatorade Player of the Year program, check out past winners or to nominate studentathletes, visit playeroftheyear.gatorade.com or follow us on social media on Facebook at facebook.com/GatoradePOY, Instagram at instagram.com/Gatorade and Twitter at twitter.com/Gatorade.