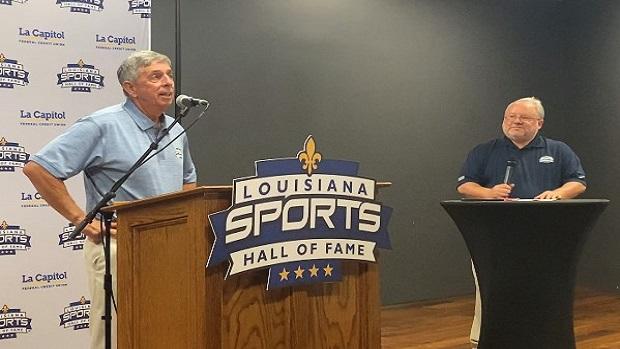 Episcopal legendary track and field and cross country coach Claney Duplechin doesn't like the term - "The Streak." But it's the term used when fans speak of Duplechin's 25-straight cross country state championships, which was broken at the 2021 LHSAA State Cross Country Meet.

Duplechin, who has won 64 state championships overall, contends the streak would not have happened if it were not for a decision he made in 1995-the year before the streak began. While the decision costs him a state title in that year, it set the tone for years...and decades to come.

The legendary coach will become only the second high school track and field and cross country coach in the history of Louisiana to be inducted into the Louisiana Sports Hall of Fame when he goes into the hall on Saturday night in Natchitoches.

In 1995, he had the best runner in the state, but the young man cheated on a test and was suspended from school. Duplechin was not going to let him run in the state meet.

The young man was also a swimmer. The swim coach was going to allow the young man to swim at the state meet.

"It's very hard to put in words. It means the world to me to be with this group of people in this fine organization. Just to represent track and field and track and field coaches in this country, and definitely in this state. I feel blessed to represent them."
Episcopal's Claney Duplechin on induction into La. Sports Hall of Fame

Episcopal's headmaster intervened and called Duplechin and the swim coach in for a meeting.

While some coaches may have agonized over the decision, it was a no brainer for Duplechin.

"We preach "Go Knights, good people, have fun, state champs" every day," Duplechin said. "I had my rules. If the rules are broken, you don't run. The athletes had to know that I mean what I say."

Duplechin was worried that the powers that be at Episcopal would force him to let the kid run in the state meet.

"If that had happened," Duplechin said. "I wouldn't have stayed."

Duplechin's career began with Pete Boudreaux, the only other La. high school coach in the Louisiana Sports Hall of Fame, at Catholic High School. He was a football coach and wanted baseball to be his second sport, but Duplechin was assigned to coach the freshman track team, under Boudreaux's direction.

The young football coach made a name for himself on the defensive side of the football. At 24 years old, he was hired at Episcopal to be the head football coach and athletic director.

In 1978, an Episcopal assistant football coach, Brannon LeBlanc, expressed an interest to become a head football coach, Duplechin made the selfless decision to slide out, or slide over to cross country, where Duplechin's first team finished as runner-up.

After that first state meet, he was hooked. "And the rest is history," Duplechin said.

Saturday night, Duplechin becomes a part of history as he goes into the Louisiana Sports Hall of Fame.