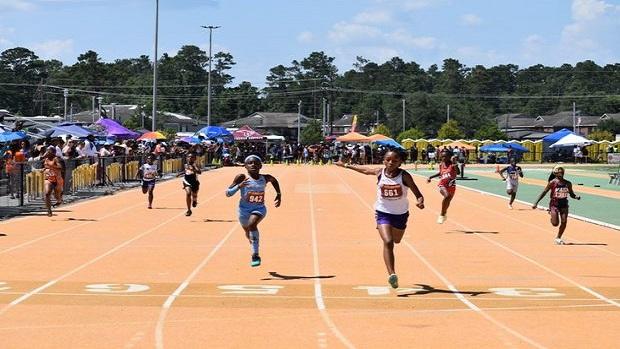 If at first you don't succeed, try, try again!

That's what New Orleans Metro Stars sprinter Cali Smith did at the AAU Region 11 National Qualifier, and it's the reason she has been selected as this week's MileSplit LA Future Star.

Smith met former LSU All-American Aleia Hobbs last year. Before this year's meet Hobbs talked to Smith on the phone and told her she could break her records for 9-year old girls in the 100m and 200m at the AAU Region 11 Meet.

She was helped by South Baton Rouge Jaguar Tyler Parker, who pushed Smith from start to finish. Parker ran a 29.36.

"It felt good," Smith said after the race. "This girl that got second, she is very fast. She is definitely good competition."

Smith said that she worked on not bobbing her head and running the curve hard in order to win the race.

Now, Smith will turn her attention to the National Junior Olympics in Greensboro, North Carolina. Smith will run in the prelims of the 200 meter on Monday, August 1st at 3:15pm. Louisiana track and field fans will be able to watch the meet LIVE on MileSplit.

Don't be surprised if Smith runs even faster in North Carolina.

What does Smith think she can run at the National Junior Olympics?