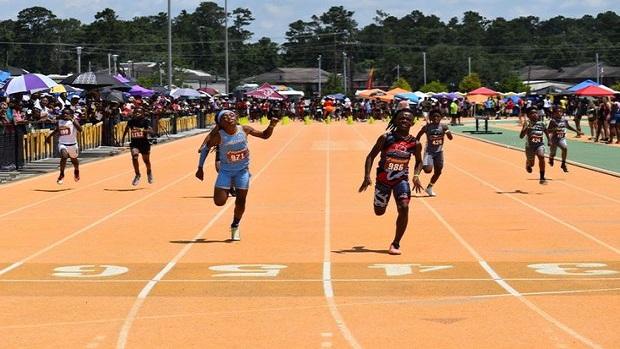 There were so many outstanding performances at this weekend's AAU Region 11 National Qualifier, Justin Horne for example. He broke the meet record in the 17-18 boys 110 hurdles with time of 14.05. Not only that, he broke with some stiff competition as U.S. Express' Louis Rudge finished second in a 2.0 version of their LHSAA Class 5A race.

However, for this poll. We wanted to take ONE athlete per team. And while we cannot list all athletes in polls, we tried to come up with a list which represented a nice sample size of the amazing boys and girls assembled in Hammond.

Here is a little information on each athlete...

Marquez Stevenson - "Macho" picked up where he left off last summer when he ran a 46.85 at the AAU National Junior Olympics, surpassing Mansfield's Jerry Wilson to become the fastest quarter miler in Northwest Louisiana history. But his 400 meter gold medal wasn't the highlight of his meet. It was his record-breaking 200 meter performance, against some familiar foes like Holy Cross' Krosse Johnson, who beat Stevenson in the LHSAA Class 5A 100 meters. Stevenson blazed to a 21.09, breaking the record of 21.32 set by Haughton's Kynoz Smith in 2011. When we say blazed, we mean it. So hot, in fact, that Stevenson's spikes couldn't handle the heat. There are hole in the sole of both shoes. Aaliyah Lane -  Everybody talks about being the GOAT--Greatest of All-Time. While she is breaking meet records now, don't be surprised if Lane breaks the NATIONAL record next month in Greensboro, North Carolina at the National AAU Junior Olympics. Here time of 2:16.43. She is only three seconds away. While the 800 is her favorite race, she has elite sprint speed. Her 25.99 winning 200 meter time was only .11 off Aleia Hobb's meet record of 25.88 in that race. Lane's record breaking 400 meter time (57.71) broke the meet record set by Scotlandville's Makeriah Harris, who has the fastest 400 hurdle time in Louisiana history. Jermaine Brown - All you need to know about Brown, who was competing in the 15-16 age group, is that he had the fastest 100 meter time--and it wasn't close. Run Fast's Darryl George won the 17-18 100 meters with a time of 10.75, beating the likes of LHSAA Class 5A state champion Krosse Johnson in the process. That time paled in comparison to Brown's 10.64, which betters the one-year old record of 10.86 set by Armani Cargo in 2021.

Aiden Monistere - Won the boys 3000 meters (9:44.55), which included a fight for the finish which resulted in Monistere finishing the race in lane seven. The runner in the 17-18 division drifted to prevent Monistere from passing him in the last 100 meters.