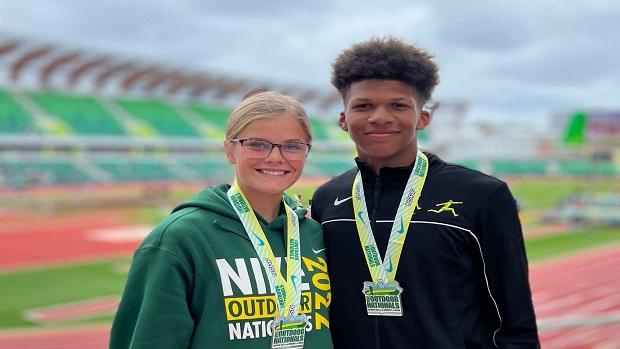 TRINITY SPOONER AND TRISTAN GOODLY ARE ALL SMILES AFTER WINNING GOLD IN EUGENE!

Two Southwest Louisiana athletes, who completed their junior year last month, deciding to not wait until their 2023 outdoor senior season to make a name for themselves on the national stage. South Beauregard's Trinity Spooner unleashed a throw of of 162-0 on her sixth final throw at historic to Hayward Field to capture the national title in the girls javelin.

One other Louisiana athlete came home from Oregon with a gold medal, Hammond's Beau Domingue, who won the pole vault with a vault of 16-8.

Spooner wasn't the only Louisiana javelin thrower to have success in Oregon. Catholic's Paul Catalanatto, who was the LHSAA Class 5A State runner-up to the No. 1 javelin thrower in the nation --Jesuit's Jack Larriviere , recorded a big personal best of 208-1 for third place.

Other Louisiana athletes finishing in the top eight included Ruston's Bryanna Craig , who jumped 5-6.5 and finished fifth in the high jump, and Central Lafourche's Ke'yona Gabriel, who jumped 18-8 in the long jump and finished seventh.