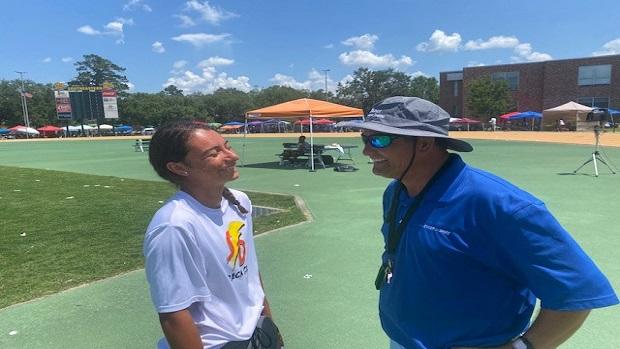 BREANNA BECERRA AND HER FATHER, MIGUEL BECERRA, SHARE A LAUGH DURING AAU MEET

Father's Day must seem like the movie Groundhog Day for the Becerra Family. It's the same thing every year. The days leading up to the third Sunday of June are spent at the Southeastern Louisiana University track and field complex in Hammond, Louisiana toiling in the heat as they host the AAU Region 11 National Qualifier.

As far back as anyone can remember, not only has Southeast Louisiana Road Runner Coach and Meet Director Miguel Becerra been busy directing the meet, which-at times-is like directing a three-ring circus with all of the moving parts, but he has also watched his two daughters Megan and Breanna grow up competing in the meet.

This year, Breanna Becerra, thought her role at the meet would be limited to helping her father any way that she could. On Friday, that included donning a headset and helping Crescent City Timing get athletes lined up in the right lanes.

However, on Saturday her coach with the Speed Dynamics Track Club called her into duty for the last event of the day-the 1600 meter relay.

"Just get the stick around the track," her coach told her

But Becerra, who won state championships as a freshman and as a senior under her father's direction at St. Thomas Aquinas, attacked her part of the race despite having limited practice time over the last ten days due to a  to rest a nagging injury before heading off to Jacksonville State University.

Becerra, who is headed to compete at Jacksonville State University, injured her knee doing drill work in practice. Since then she cross trained in case she was called upon to compete.

"It was fun," Becerra said of watching his daughter in her last AAU National Qualifier meet. "She still ran a 59. She was kind of surprised in herself. I was like you didn't lose that much fitness in a week and half. She's been doing some kind of training."

Becerra's uncle, Jose Becerra, didn't miss an opportunity to joke with his niece about running for a different team.

"Why'd you switch teams," he asked. "Your coach must have been a real jerk."

In less than week, Miguel Becerra's oldest daughter, Meghan Becerra will get married. On Friday and Saturday, she was helping her father by working the clerk of course table.

"He called me up and was like, I need your help," Meghan Becerra said. "I drove down from Mississippi and got here on Thursday night. I like coming here every year to help with this meet. It's fun for me."

It's an easy decision to help her father, when he helped to push during high school, which she credits him for track and field career at Mississippi College in Clinton, MS.

"One thing about my dad is that he never gave up on me, " Meghan Becerra said. "He always pushed me. He was really hard on me, which was hard throughout my years of high school, but it helped me be able to compete at the collegiate level, all because of him."

Meghan Becerra said that during the National Qualifier week he is at the track at 5 am in the morning before anyone else arrives, and that he is always the last to leave.

While Breanna Becerra's last LHSAA Class 2A State Outdoor Meet was bittersweet, with it being the last time her father coaches her, Becerra knows that her father will be there to support her as she begins to write the next chapter of career.

"He has helped me through so much and I'm so thankful for him," Breanna Becerra said. "I'm excited to go off to college and I know that he is going to support me through everything."

While his girls are thankful for him, Miguel Becerra is thankful for his all of his relatives, who give the meet a true family atmosphere and the dependable meet officials and workers, which come through for him every year.

"I guess we've been doing it so long, and we do this for a living,"  Miguel Becerra said. "That's what we do. We put meets on for people especially in our area because nobody else wants to put meets on. So, when I can bring in those key players, and they help me out. It makes my job really easy. I'm tired, but we get the job done year after year. I couldn't do it without my family and all of those people who commit to coming to the meet every year."