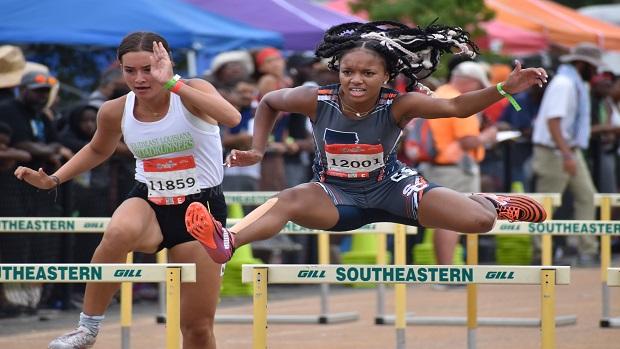 The summer track and field season turns up the heat this weekend with the AAU Region 11 National Qualifier at Southeastern Louisiana University in Hammond, LA. Here are a few athletes to keep an eye on. Sewell just completed his junior year at Woodlawn-Baton Rouge. Look for him to be motivated to perform well this summer after he was visibly disappointed with a third place finish at the LHSAA Class 5A State Outdoor Championships  in the 100m (10.61). He returned later in that meet finish third in the 200m (21.38).

Sewell is entered in the 100 & 200 meters. The latter will be interesting as he faces No. 3 on our watch list--JaRell Joseph. Finished her sophomore year at Leesville High School by tripling and scoring in all three distance events at the LHSAA Class 4A State Championships. Her highest finish came in the 3200, where she finished as the runner-up to the LSU signee from Vandebilt Catholic -- Ella Chesnut. Competing for Lake Charles College Prep during the high school season, Joseph provided us with one of our favorite post-race reactions when he finished second to Kaplan's Gabriel Clement (47.81), but was amazed at his time, a personal record 48.03 .

Joseph returned the following the week to beat Clement and claim his first state championship at the LHSAA Class 3A State Outdoor Meet with a time of 48.11. Clement finished as the runner-up with a 48.59. Guillory lost to her Alexandria Senior High teammate Sarah Dupuy by 20 feet in the District 2-5A Meet, but it's not how you start the championship track and field season. It's how you finish, and Guillory finished well winning both the Region 1-5A Meet (133-11) and the LHSAA Class 5A State Outdoor Meet (138-8).

Guillory and Dupuy are teammates again this summer for All Cenla Elite Track Club, and if it's true that iron sharpens iron, the rest of the field in the 17-18 girls javelin is in big trouble. The 13-year old from the Ultimate Performance Track Club looks to make some noise in the throwing events. A two-time All-American in shot put. Talley finished 3rd in the National AAU Junior Olympics in 2018 (27-2) and finished sixth in 2019 (29-8.75). In both 2018 and 2019 he won the AAU Region 11 National Qualifier in the shot put and he added to that win streak last year with a personal record of 39-0.

Talley is quite capable in the other throwing events as well. Last year, besides his win in the shot put, he also made the podium in the discus (79-3) and turbo javelin (96-2) with personal record throws.