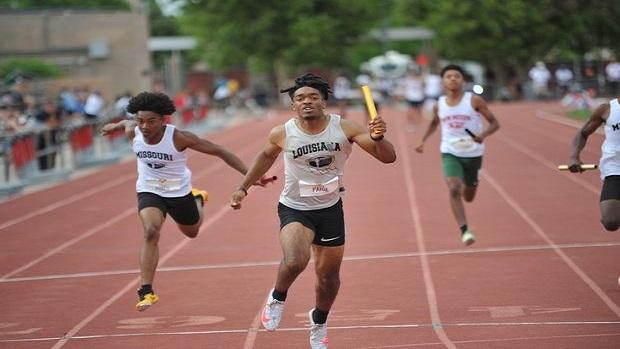 RUSTON ANCHOR LEG JALEN PAIGE LEANS AT THE LINE OF THE 400m RELAY AT GSW CLASSIC!

At the LHSAA State Outdoor Championships, the Ruston boys 400 relay team saw their state title hopes fade in the last 50 meters of the race. They put that disappointment behind them in the Land of Enchantment, where they won the Great Southwest Classic sprint relay title with a time of 41.32.

Held in Albuquerque, New Mexico, the Great Southwest Classic is a collection all-star track and field athletes who come together to represent their state. The Bearcats certainly represented Louisiana well.

It is rare in an all-star meet for all four members of a relay to be from the same high school. In fact, Ruston assistant Kevin Jackson didn't know that all four of his sprinters would be running in the race until a few days before when a couple of other sprinters dropped out. It didn't leave Jackson much time to work handoffs before traveling to the meet.

Running out of lane five, the nation's best triple jumper, Brandon Green, started things off and wasted no time in making up the stagger and putting his team in the lead. Green had a smooth handoff in the first exchange to the nations' fastest kicker, Brady Beason, who maintained the lead down the back stretch.

Beason ran up on Carson McPherson in the second exchange, but was able to manage the hand off in tight quarters. McPherson maintained the lead and, with the help of the anchor leg, Jalen Paige, and flawless third and final exchange, extended their lead over race favorite, Missouri (41.68).

Missouri was considered the favorite in the race because they had the three of the top seven fastest sprinters in the meet, including the fastest in junior Issam Asingna, who won both the 100 (10.44) and 200 (20.76). Other Missouri speedsters included Keilan Powell, who finished fifth with 10.87, and Angel Dickerson, who finished seventh with a 10.91.

"We were worried because our 100 meter guys (Beason and Paige) didn't run a time in the 100 that was anywhere close to their personal records," Jackson said.

But that was least of his worries. Green, who started the meet by finishing third in the long jump struggled in triple jump-scratching on all three attempts in the preliminaries. Adding to his problems was a nagging Achilles injury.

Jackson called Team Louisiana coach Juan Plaza to see if there was a leg who would be able to step in for Green, but there was none available.

"When we found out there wasn't anyone else who could do it, I looked at Brandon and asked him if he could go," Jackson said. "He looked at me and said 'yeah, coach. I can do it."

One leg that Jackson was not worried about was his anchor leg. He saw what Paige did on the 4x200 relay team on Friday and knew that he was ready.

"I think he was down on himself after the state meet," Jackson said. "That gave him motivation for this meet. When I saw him run the 4x200 on Friday, I knew he was ready."

"I didn't want that same result as the state meet," Paige said. "I wanted to represent Team Louisiana."

And as far as the underdog role?

"We couldn't ignore what they (Missouri) did in the 100 meters," Paige said. "But at the same time, we knew what we had to do-get clean handoffs. We were focused and we went out there and did it."

Paige mentioned how special it was for the four seniors from Ruston to write their final chapter of high school competition-- together in New Mexico.

"It was very special," Paige said. "I know we made Coach Jackson proud. It's a moment we'll never forget."

"They are gamers," Jackson said. "For them to overcome the adversity the way they have and run their season best at this meet, I couldn't be more proud," Jackson said.

While it's hard to single out one Bearcat for their performance on the winning relay, the dance floor at the Athlete Party after the meet was not as difficult. Both Paige and Jackson gave the nod to Carson McPherson for Bearcat with the best dance moves.

"Carson McPherson," Paige laughed. "He was turnt up."

Green and the 400m relay team were not the only Bearcats to make the podium at the Great Southwest Classic. Ruston junior Joshua Anding had a person record of 48.67 in the 400m, finishing third.