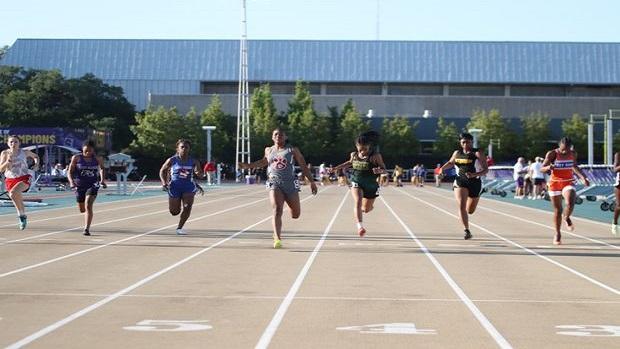 The road to the LHSAA Class 2A State Outdoor Meet 100 meter starting line went through Memphis-and a two-month stay at St. Jude Children's Research Hospital-for Dunham's Jordyn Minor, who was diagnosed with Acute Lymphoblastic Leukemia (ALL)when she was nine years old. It made her state championship victory, with a time of 12.11, that much sweeter.

Minor went from a little girl who couldn't take more than two steps after chemo treatments at St. Jude, to a strong teenager, who had no problem with the other eight state-qualifying competitors at LSU's Bernie Moore Stadium on Friday, May 6.

It was all a bit of a blur for Chastity Smith, Minor's mother, who watched her daughter's race at the state meet through tear-filled eyes. Smith's tears that evening were much different than those shed on December 1, 2014 when she received her daughter's leukemia diagnosis.

For Minor, winning gold at the state meet was a surreal moment.

"In that moment, I just thought about all the support I had," Minor said. "My family, my friends, my school, my coaches. Everyone! I was just so grateful to have that support system."

It's no surprise to her mother and father. Joel, that her first thought after winning the race was on others. As she battled Leukemia, it was others that Minor considered before allowing anyone to see the pain she was going through.

"She would share with us," Smith said, "but if a doctor would come in the room, she would sit up and wipe the tears away. When she lost her hair, she wore a hat. She didn't wear it because she was embarrassed. She wore it because she didn't want others to feel uncomfortable."

"Going through chemotherapy for two and a half years, I relied on that same discipline to do what I had to do every day to get better. I wasn't going to let cancer win."
Dunham Sprinter, Jordyn Minor

Minor knew a thing or two about being uncomfortable, even before her battle with leukemia. It started with her training in gymnastics when she was four years old. The long practices, followed by late nights of doing homework or studying for tests. The pressure of gymnastic competitions. The competitive fire. The desire to win. It can take a toll on a little girl, but it didn't seem to bother Minor. She was comfortable in uncomfortable environments.

And the sacrifices didn't bother her mother, who had a dream that her daughter won the Olympics in gymnastics and had her at the gym the very next day.

Minor believes it was the discipline of gymnastics, which helped her fight...and beat Leukemia.

"It takes a crazy amount of discipline to spend hours in the gym every day training to be the best you can be," Minor said. "Going through chemotherapy for two and half years I relied on that same discipline to do what I had to do every day to get better. I wasn't going to let cancer win."

Two and half years of chemotherapy.

There was a daily  dose of Mercaptopurine she took by mouth. Every week there was a dose of Methotrexate through the port in her chest. Once a month, she would get a dose of this in the form of a spinal tap.

When the chemo was finished in the summer of 2017, it was time to allow her body to recover-from both the sickness and the chemo. It was three years without her gymnastics "family." There finally came a day when Minor told her mother she wanted to go back to the gym.

"I missed the girls and coaches," Minor said. "When you are going to the gym every day and working for four hours, it becomes a family. I missed the competitions, too, but mainly I missed those relationships you build with other gymnasts, and the coaches."

Smith took her daughter and watched her as she just sat there, taking it all in again.

Once Minor had a little taste of gymnastics, she slowly started on that long road back to the top of being one of the state's best-again.

"She made it all the way back to level 10," Smith said. "That's the highest ranking you can have. She was back."

But even as Minor was on her way back to being one of the top gymnasts in Louisiana, there was something missing. It wasn't the same for Minor. The passion she had for the sport of gymnastics was not there. She began to talk to others about her feelings toward gymnastics. She began to verbalize with friends and coaches the "what ifs."

"It was like she was trying it out on other people before she talked to us about it," Smith said. "Then she finally sat us down and we had a family talk. She told us she was ready to move on from gymnastics and try something else. We could tell when she spoke to her that God had been dealing with her about this decision."

Smith's father, Gene Blanchard, who had passed away June 3, 2017, after watching his granddaughter beat his granddaughter's biggest opponent for two and half years, was a standout on the Alabama State University track and field team. Minor took her last chemo treatment on June 30, 2017.

He had always wanted to watch Minor compete in track, and even wanted to coach her, but had to accept  that track was not her sport. Or was it?

Thoughts of her grandfather, and the success he had, had entered her mind when Minor decided on track and field. When she did make the decision, she was all in.

"She said 'find me a coach,'" Smith said. "She didn't want to go out and look like she was just starting. She wanted to have the best coaching so that when she did compete, spectators would not see any differences between her and girls who had been competing in the sport their whole life."

"When I saw her run the first race, I just looked at my husband and we were both shaking our head and smiling. We knew that this was it. We knew she had made the right decision. We saw that twinkle in her eye again."

While Minor has found another sport-and made quick work of becoming one of the best sprinters in the state-her battle with ALL is not officially over. She is officially considered in remission, but the road to being cured is a little longer.

"Because her cancer is a blood cancer and cannot be seen on scans but only through blood draw, and because the body reproduces blood cells rapidly, she will not be labeled 100% cured until she is 20 years old," Smith said. "That's 10 years from no evidence of her cancer. The cancer has the longest wait for a 100% cure notification. We will still travel to St. Jude yearly for blood draws."

As for track, Minor is looking forward to what's ahead.

"I am so excited to continue working with my coach," Minor said. "Who knows. There may be some races in my future this summer. Or it may simply be training to get better for next year."

Through it all, Minor has maintained a 4.08 GPA from elementary to high school. She has scored a 26 on the ACT and is in the National Honor Society and serves in school leadership roles at Dunham. She was selected as a junior maid on the homecoming court.

Just like she did during her illness, Minor continues to think about others. She gives back as a St. Jude Ambassador and organizes TeamJordyn every year for the St. Jude Walk/Run in September.

While the road for Minor to get to this point has been a long and winding journey with many obstacles, like becoming a state champion, it will make arriving at her destination that much sweeter.