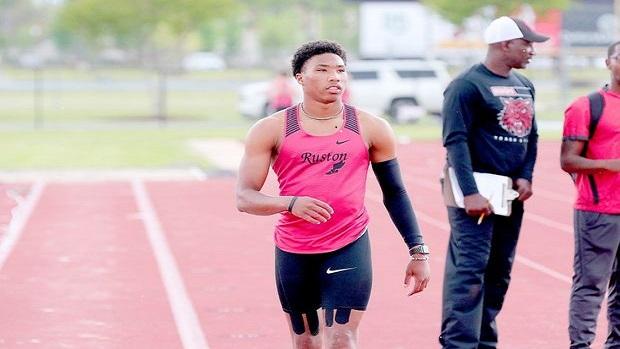 It's 9:30pm on a Wednesday night and inside of 72 hours the LHSAA Class 5A State Outdoor Track & Field Championship will be decided at LSU's Bernie Moore Stadium, and the No. 1 triple jumper in the nation, Ruston's Brandon Green, is driving home from work at Chik-fil-A...and returning calls from the media that he missed while he was at work.

"BJ"--as he is known on the Ruston High School campus-- has grown accustomed to multi-tasking. It's something that he had to learn early on when he was in elementary school and his mother had a stroke.

"It changed my mindset," Green said. "I knew that I had to grow up fast, and be the man of the house. I had to take care of the things that she wasn't able to take care of."

It also taught him to be grateful for what he has.

"That experience humbled me, and made me grateful," Green said. "It showed me just how quick things you take for granted can be taken away. It taught me to be appreciative, and value what you have while you have it."

When his junior high track coach asked the team if anyone wanted to try the long jump or triple jump, Green decided to give it a go.

"I could tell right way that I was good at it," Green said. "It came natural."

However, it was not love at first hop, step, and jump for Green.

"It took time for me to really enjoy jumping," Green said. "I didn't take pride in it, like I do now," Green said.

When did that change? Ironically enough, it happened at the end of his freshmen season when he didn't qualify for the LHSAA State Meet. Actually, his jump of 41-7 was fifth in the District 2-5A Meet wasn't even good enough to qualify for regionals.

"That was an eye-opening experience for me," Green said. "I knew I was better than that, and I hated that feeling of staying home while my teammates went on to represent Ruston at regionals and state."

THE TOP HS BOYS TRIPLE JUMPERS IN THE NATION!

With the help of Ruston head coach Allen Whitaker, Green went about the work of becoming the best in the nation, but it didn't happen over night.

However, he did go from not qualifying for the regional meet as a freshman to winning a state indoor title in the 2020 LHSAA Division I triple jump title as a sophomore with a jump of 45-5, helping Ruston to the team title.

Then COVID-19 hit, shutting down the 2020 outdoor season after the first week.

"It was hard to lose that season," Green said. "But, in a sense, I think it helped me develop as an athlete. I used it to my advantage...to work on myself."

Green spent time in the weightroom and on the field working on acceleration, and in the process of becoming faster and stronger, he aslo developed his mental toughness.

The worked has paid off.

Early during his junior year, the Bearcat triple jumped over 50 feet, joining an elite group of Louisiana HS jumpers, a couple of whom (LaMark Carter and Walter Davis) have gone on to represent the United States in the Olympic Games.

This season, Green has continued to shine, and while his coaches have played a big part in his developement, it hasn't hurt that Ouachita's Jeremy Nelson, who competes in the same District 2-5A as Green, has--at times during both the indoor and outdoor season-- held the No. 1 ranking in the US.

"It's been great," Green said. "It brings out the competitor in me, knowing there is someone right down the road who is coming for me. It keeps me grinding and locked in on big goals."

But Green hasn't just made an impact on the track team--and the football team where he played defensive back. Green has made an impact at Ruston High School, so much so that his peers named him "Mr. Ruston."

"I was proud when they chose me as "Mr. Ruston," Green said. "It's lets me know that they value me and look up to me as a respectful young man. It was a great honor to be chosen."

Green is not the only Louisiana HS athlete with a US#1 ranking going into the LHSAA State Outdoor Track & Field Championships today. Jesuit's Jack Larriviere, who made a life-altering decision after quarterbacking the Blue Jays to one of their best seasons in school history.

"I decidied to not play baseball," Larriviere said. "I just didn't love it the way I had in the past. I wanted to try something else, so I asked the track coach if I could come out and throw the javelin. I think it worked out pretty well."

THE TOP BOYS HS JAVELIN THROWERS IN THE NATION!

Larriviere picked up a javelin for the first time in mid-February. In his first meet of the season he unleashed a throw of 195-0, making him the No. 1 thrower in the nation.

But he wasn't done yet. A couple of weeks later, Larriviere threw 220-6, which is a personal record and the nation's best throw to date. He proved it wasn't a fluke with another throw of 220-0 at regionals.

It was not lost on college coaches, who quickly came calling. Missouri, Alabama, Kentucky all expressed interest. However, it was the program closer to home--LSU where Larriviere felt most at home.

"I found a home at LSU," Larriviere said. "I met with Coach Clayton and he went through the schedule, the expectations, I met the staff and other throwers on the team. I fell in love with it."

Today, Larriviere will throw in his new home at LSU's Bernie Moore Stadium. Unlike most of the competitions he has been in this season, Larriviere will be throwing against at least one thrower who, like Larriviere, is one of the nation's best- Catholic's Paul Catalanatto, who is the US#11 in the javelin with a best of 198-5.

"I'm just looking forward to competing against the best," Larriviere said. "In most of the competitions I have been in this year, I have won by 40-50 feet. That will not be the case on Saturday."