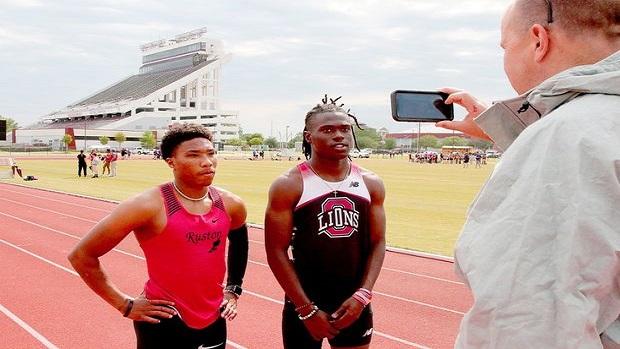 There are not many high school track field athletes in the nation who can say that they have been the No. 1 ranked athlete in their specialty in both the indoor and outdoor season. And while Ouachita Parish triple jumper Jeremy Nelson may not be in a class all by himself, it certainly doesn't take long to call the roll.

Currently, he ranked No. 4 in the nation after a couple of Texas high school triple jumpers moved past him in the last couple of weeks. But rankings are on  paper, or websites. Nelson thrives on big-time competition, and it won't get any bigger for Nelson than the 2022 LHSAA State Track & Field Championships in Baton Rouge on Saturday.

Jeremy Nelson's success started long before he stepped on the campus at Ouachita High School. It started being raised by his mother, Natasha Nelson-Sullivan.

"She raised me to have a good head on my shoulders," Nelson said. "That's where it started. It started in the home being raised by my mother."

When he did get on campus, his peers saw that Nelson was different.

"I always had big goals," Nelson said. "I guess others looked at me and saw someone they could model themselves after. They saw someone who leads by example and worked hard. It just worked out for me to be a well respected student-athlete at Ouachita."

So loved and respected at OPHS was Nelson, that he was named "Mr. Ouachita" by his peers.

THE TOP HS BOYS TRIPLE JUMPERS IN THE NATION!

When Nelson arrived at Ouachita he was a free safety on the football team, on the soccer team, and a member of the track team. After his first two years, he dropped soccer to concentrate on track.

While track is more demanding for Nelson, it's also more rewarding.

"Track is hard," Nelson said. "It's not like football where you take that pounding, but it's the most mentally demanding. You have to be able to push yourself. But there is nothing like winning. That's why I like it so much."

He enjoyed it at LSU's Last Chance Qualifier during the indoor season when got the crowd going to help propel him to a No. 1 ranking in the US with a jump of 49-8. He jumped even further at the LHSAA State Indoor Meet, but his 49-11.25 was second to Ruston's Brandon Green, who jumped a nation-leading mark of 51-6.

Nelson joined the 50 foot club in the first outdoor meet of the year at the D&H Relays on the campus of ULM. Again, the ULL signee led the nation with a mark of 50-3.5.

He held the No. 1 ranking until the Texas Relays, where the District 2-5A triple jumpers put on a show for the spectators in Mike A. Myers Stadium. Green, once again, came away on top with a jum of 51-3.75. Nelson finished second with a 48-5.25.

On the track, Nelson knows the group who deserves the credit for his development as an athlete.

"I cannot say enough about Coach Smith, Coach Tumey, and Coach Watkins," Nelson said. "They saw the potential in me before I saw it in myself. They pushed me hard and helped me with different drills and different workouts. They put me in the best position to be successful. I wouldn't be where I am without them, for sure." And as for Saturday's LHSAA State Championship at Bernie Moore Stadium?

"It's a big stage," Nelson said. "We've been in the championship season for a couple of months now, but there is nothing like the state meet. There is going to be a big crowd. The stakes are high. It's going to be exciting."

At last week's Region I-5A Meet, Nelson had some nagging issues with his ankle. He only took one jump and monitored the marks to make sure he was going to advance.

Family, friends, and teammates are excited that "Mr. Ouachita," who has shown throughout the 2022 season that he is one of America's best triple jumpers,  is 100% going into his final high school competition on Louisiana soil.