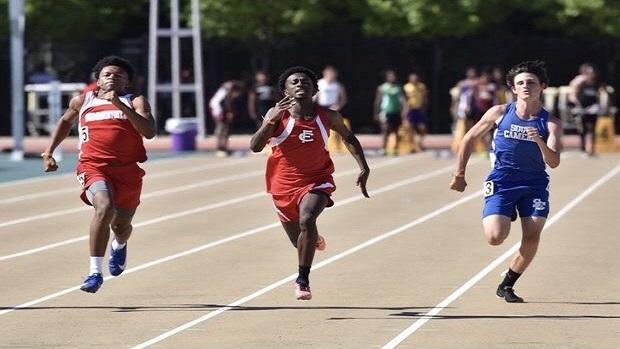 When you're track star at a high school with an enrollment of 52 students, time is a precious commodity. First-year Family Christian head track coach Isaac Amedee has learned to share senior state champion sprinter Ericleon May with other sports and make sure that when May is at practice to equip him with tools to perfect his trade.

Exactly one week before the Class C LHSAA State Championship, May was with the Family Christian baseball team, and he was with the Flames again on Friday. But Amedee will get some time with May on the weekend to prepare for the 2022 LHSAA Class State Track and Field Championship.

"Honestly, he is not in track shape because we have had to share him with other sports," Amedee said. "But that is just the kind of kid he is. He doesn't want to let his friends down. That's how much he loves his school."

May says he is excited about defending his Class C 100m and 400m championships from last year's 2021 LHSAA State Meet, but he is also excited to add another race to his repertoire, the 200m where he is ranked No. 1 in Class C (23.77)

"Last year, it felt amazing to put my team on my back and win two state championships ," May said. "This year, I have a new coach and looking forward to taking the new techniques and using them in the state meet."

For starters, Coach Amedee has worked with May on his drive phase and coming out of the blocks. Amedee has also worked with him on his arm action, or "ear to pocket" as May calls it.

Connor Harper, a senior sprinter and jumper from Hicks, is back to challenge May in the 100 meters. Harper finished second (11.61) to May at last year's state meet.

Another sprinter in the mix to upset May is Gibsland Coleman eighth grader Demarcus Durham, who won the Region I Class C regional with an 11.66, but has a personal record of 10.99, which is the No. 1 time in all of Class C.

While May may have carried the Flames a year ago, he will have some help this year.

OTHER ATHLETES TO WATCH: