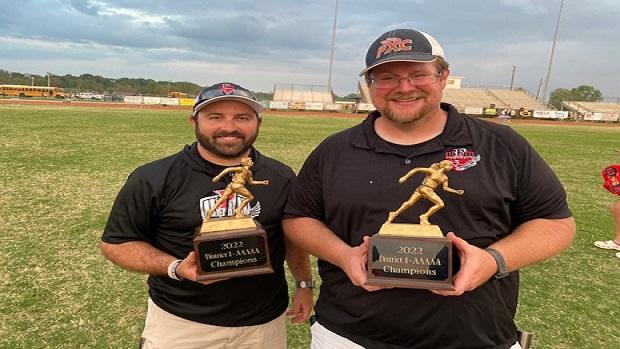 Last year, Benton head coach Scott Reeder had to share the boys District 1-5A title with his college teammate, Captain Shreve head coach Kendrick Law. This year, Parkway, who was able to knock off Shreve's five-year run of girls district titles a year ago, was able to squeeze by and sweep both divisions of the District 1-5A Championships at Benton.

The Lady Panthers edged out Benton in the girls division by 1.5 points (129-127.5) to defend their district championship from a year ago. On the boys side, the margin of victory was even smaller as Parkway slipped past Benton by .5 point (108.5-108). For the boys' program, it's Parkway's first 5A title, and the first time Parkway has won both divisions in the same year.

It's quite possible that neither Reeder nor Falting had any idea how tight the race was for the championship trophy as both were busy Thursday afternoon hosting the meet.

For the Lady Panthers, it started in the field events, especially the throwing events where Parkway flexed their muscle. Chloe Larry (javelin), Makayla Williams (discus), Jayla James (shot put) all picked up wins in their specialty.

PARKWAY'S CHLOE LARRY TALKS ABOUT HER PR AND WIN IN THE JAVELIN!

In the jumps, Parkway didn't have any winners, but they did have multiple scorers in the high jump, long jump, and triple jump.

Two jumpers, in particular, came up big for Parkway

"Aja Tellis in the triple jump got third," Falting said. "She wasn't seeded to get any points. Then Tylissa Henderson, Parkway's leading rebounder in basketball, came out. She has high jumped three times in her life. She jumped 5-1 today, and that was absolutely amazing for us. So, that was a real big deal."

On the boys side, Parkway freshman Devon Oliver and Jake Morton helped the Panthers to 22 points in the throwing events. Oliver finished second in the discus with a personal record 147-5, which ranks No. 10 in the nation among all high school freshmen. Oliver also finished fourth in the shot put (45-0). Morton finished third in the shot put (45-8) and fourth in the discus (132-11). Parkway also scored 17 points in the jumps, with their best finish coming from Camaro Mayo's runner-up finish in the boys long jump (20-7.50).

In the running events, Parkway won the 1600 and 3200 relays and finished second in the 400 and 800 relays to give the panthers 36 points in the relays alone.

BENTON'S JAMIE WILLIS WAS THE ONLY ATHLETE TO WIN FOUR INDIVIDUAL EVENTS AT 1-5A MEET!

On the boys side, things started well for the Tigers as Davis Sellers had a big personal record throw in the boys discus (153-2). That was followed by a 1-2 finish in the javelin by Benton's Jeffery King (158-7), which ranks No. 21 in the nation among all high school sophomores, and Austin Cole (156-9).

There were several point getters in the jumps as well, including Benton sophomore Mark Perry, who got his first District 1-5A title in the high jump (6-4) after finishing second in 2021. Perry also scored points in the long jump and triple jump.

AIRLINE'S BRIANNA TAYLOR TALKS ABOUT HER DISTRICT 1-5A CHAMPIONSHIP IN THE 100!

BYRD'S TRENT WELLS TALKS ABOUT HIS VICTORY IN THE 1600 AT THE DISTRICT 1-5A MEET!

It was family affair for the Wells family as younger sister Laila Wells won her first district championship in the 800 (2:29.27). Wells was also a runner-up to Willis in the 300 hurdles (50.37).

Byrd sophomore Jenna Key, who was ranked No. 4 in the 3200 meters in Louisiana during the 2022 indoor, but did not compete at the LHSAA State Indoor Meet due to a freak injury at practice, made her outdoor debut at the District 1-5A Championships running in the 3200 meters. Key (12:06.24) won the race and fellow Byrd sophomore Hudson Roberts (12:40.19) finished second.