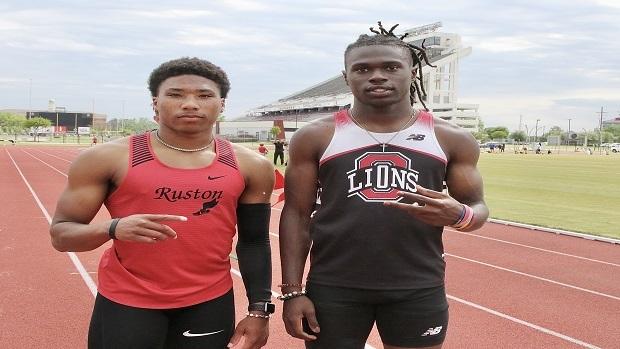 Not counting Newbury Park in California, where the three best 3200 meter runners in the nation attend the same school, there is only one district track meet in the United States where the best in the nation faced the second best in the nation. It happened Wednesday afternoon at the District 2-5A Meet at ULM's Brown Stadium.

The prelims of the boys triple jump, where Ruston's Brandon Green, the nation's No. 1 triple jumper, and Ouachita's Jeremy Nelson, the No. 2 triple jumper in the nation, were underwhelming. Both of Green's first two jumps were 48-4.4 and 48-10. Nelson jumped 46'8 on his first attempt and fouled on his second.

On his third jump, Nelson improved to 47-7. Green, who had the lead, passed on his third attempt.

Then things got interesting.

On the first jump in the finals, Nelson took the lead--jumping 49-8.

"At first, I was going to shut it down," Nelson said. "But I wanted a good jump going into next week just to feel good about it, and then it just kind of happened. Everything hit. It was a good jump."

The lead was short was short lived for Nelson as Green immediately answered with a 50-7.

"Before that, I saw what he jumped," Green said. "We compete against each other. We're competitors. It gave me the competitive edge to know that I have to go out and jump farther."

Nelson decided to pass on his final two attempts of the competition. Green did the same.

Now it's on to Natchitoches next week for the Region I-5A meet, and round two of the clash of the triple jump titans.

"I'm most definitely looking forward to it," Green said. "I know we're going to have good crowd participation. I'll be able to get that clap going and the momentum we need."

Nelson is looking forward to the Region I-5A meet as well.

"I want to just keep it going," Nelson said. "Keep jumping far. Like Brandon said, we are going to have crowd participation. It should be a good meet, so we can keep the momentum going all the way to state and anything after that."

And what about being able to compete against the best in the nation--week in and week out--in your own district?

RUSTON'S EAN OUTLEY TALKS ABOUT HIS DISTRICT 2-5A POLE VAULT WIN AND PR!

"It's great," Green said. "It's motivational to have the nation's best in the same district. We've competed against each other all year."

"It's good," Nelson said. "You know down the road there is somebody better than you. You know you got to keep it up. You definitely want to win so you have to keep your competitive edge."

The triple jump wasn't the only event where the two went head-to-head. They also faced each other in the long jump. However, it was Ouachita's Jaylen Kincaid who won that event with a jump of 23-2. Green was second with a 22-8.75. Nelson finished in third with a jump of 22-2.

Green and Nelson also ran a leg on their team's 400 relay.

Beason had some words for their arch rivals after the race.

"I'm done talking crap for the rest of the year," Beason said. "I had to get it out."

"There has been a lot of tension built up," McPherson added.

Green finished his near perfect day with a win in the 300 hurdles with a time of 38.31. The time ties the best time run in Louisiana this season by Catholic junior Louis Rudge.

Not only did Green have a good day, his nephew--Ruston Bearcat Ean Outley--had a day as well. Outley came into the District 2-5A meet as the No. 2 seed, but left with a personal record and a district title. His best coming into the meet was 12-6. He cleared 13-0, and just missed on his final attempt at 13-3.

"We were talking about it all week," Outley said. "Working on moving up, new pole, new steps. The main thing was run hard, plant, stay tall. I feel like I did everything except on that last jump where I missed 13-3, but I got next week when I try 14-0."

NELSON BLACKBURN AND BRYAR MADDEN TALK ABOUT 1-2 IN 1600M!