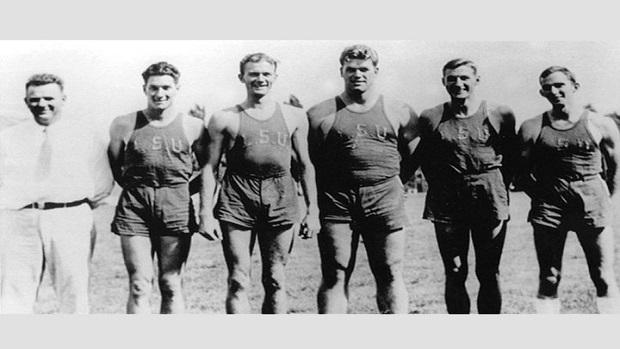 Records are made to be broken, but when Oak Grove's Jack Torrance beat Stanford's John Lyman in the shot put at the meet in a European Tour track and field meet in Oslo, Norway with a throw of 57-1 in 1934, "experts" of the sport called it the "perfect performance"-- a new world record "that would never be broken."

Those experts were unavailable for comment 14 years later when Michigan's Chuck Fonville broke the record.

For Torrance, it was an unassuming start for the Oak Grove Tiger, who was coached by A.L. "Red" Swanson in high school. A late bloomer, "Baby Jack" never won a state championship in high school and was barely breaking 40 feet with the 16-pound shot put when he arrived at LSU.

Torrance was a part of the most famous track and field team in Louisiana history--the 1933 team that would win LSU's first and only NCAA championship before coach Pat Henry arrived in 1987. Things changed quickly after Henry arrived as the Tigers won 27 NCAA titles (five by the men, and 22 by the women) in his 17 years before continuing his storied career at Texas A&M.

Coach Bernie Moore took Torrance and nine other Tigers to historic Soldier Field in Chicago for that first Championship. The team loaded into two vehicles due to "financial retrenchment."

My father wrote about the trip in his book Runners whom Renown Outran...

"They made the trip with Matt Gordy's bamboo pole lashed to the top of Moore's battered Plymouth, on a budget of $137 that was in the LSU athletic department kitty as proceeds from a concession stand at football games. Moore kept the athletes in his car laughing with stories of his courting days and his childhood in Winchester, TN.. They ran a stop light in one town and were flagged down by the local constable. But he let them go when the smooth-talking Moore told him, "Where we come from, mister, they don't even have a blinking light."

Glen "Slats" Hardin led the Tigers to that first championship, breaking two world records. He won the 440-yard dash in a time of 47.1 and the 220-yard low hurdles in 22.9. Torrance also broke a world record that day with a throw of 52-10 in the shot put.

Gordy provided the biggest surprise of the day, exceeding his previous best in the pole vault by eight inches. His jump of 14-0 tied the world record set by William Graber of Southern California. Gordy's elbow glanced the crossbar as he cleared the winning height. The bar "fluttered" but didn't fall.

At LSU, Blair lettered in basketball, baseball and track. He is best remembered for his 20 points that helped the basketball Tigers in a come-from-behind 41-37 win in 1935 over Pittsburgh. Blair would go on to play pro baseball, but before he did he set the LSU record in the javelin (213-7). That record would stand for 31 years before Shreveport's Joe May broke it at the 1955 Southwestern Relays with a throw of 218-0.

The governing body of high school athletics in Louisiana had rules in place which did not allow for athletes to compete in events they had previously won.

Jenkins returned in 1915 to compete in six events. He set state records in the hop,step, and jump (42-9) and the 880-yard run (2:09) despite stopping twice to get a rock out of his shoe. He finished the race with one bare foot, deciding that kicking it off would be his best option.

The 2018 LHSAA/AllState Sugarbowl Track and Field Meet had its share of superstars--in the boys division specifically. It was a passing-of-the-torch moment as Lafayette High's Armand "Mondo" Duplantis, arguably the most decorated and renown track and field athlete in Louisiana history, jumped a world junior record of 19-5 ½ to collect his eighth state championship in the event (four indoors and four outdoors).

Duplantis said goodbye to the Bernie Moore Stadium crowd with their roaring applause, with a tip of the cap to his school and his hometown-- by raising up his singlet to show Lafayette. Their applause is nothing new to Duplantis. He first heard it at the age of 8-years old when he set the 8-year old world record.

In Chapter 13 of my father's book, he wrote "Duplantis in a class all by himself." But, my father was referring to Mondo's father--Greg.

The chapter begins.. "To borrow Bum Phillip's line about Earl Campbell, if Greg Duplantis isn't in a class all by himself, it won't take them long to call the roll."

The older Duplantis broke the pole vault record his freshman year at Holy Cross. He jumped  15-4 in 1978, breaking the mark of 15-3 set by Baton Rouge High's Eddie Crews in 1972. In 1979 he moved to Lafayette High and improved the record to 16-6, becoming the first Louisiana athlete to reach the 16 foot club. In 1980 Duplantis raised the record to 16-9. His senior year, Duplantis flirted with 18 feet, successfully raising the state record to 17-11 ¾ . However, in the state meet, Duplantis was 11 inches off his best mark.

Unfortunately, the 2018 LHSAA state meet  was not the storybook ending for Mondo, who had every intention of winning the 5A 100 meters. His heart was writing checks that his body could not cash. Duplantis, after coming into the race with the fastest qualifying time of 10.57, finished last with a 10.79.

Another record broken at the 2018 LHSAA State Outdoor Meet was by Zachary's Sean Burrell who ran a 45.74--breaking the 23-year old composite record of 45.99 set by St. Augustine's Desmond Johnson in 19995. Burrell returned later in the 200 meters, winning with a time of 21.18 to edge out Scottlandville's Trenton Charles (21.26).

It's ironic that Burrell eats a Snickers before every track meet, because he is not going anywhere for awhile. Now a sophomore at LSU, Burrell won an NCAA Championship in the 400 meters last year as a freshman, helping the Tigers to yet another NCAA Championship.

While most enjoy seeing their name in the record book, former Cedar Creek distance runner Frankie Garcia was hoping to see his 3200 meter Class A record broken on its 30th anniversary at the 2018 LHSAA State Outdoor meet.

Garcia left Hondo, Texas at 4 a.m. Friday and drove some 500 miles with the hopes of seeing another Cedar Creek runner-- Gabe Poulin, who now runs for Mississippi College (and a regular contributor on MileSplit LA)--break it.

It was the third year in a row that Garcia had come to the state meet to see if his record would remain. In 2016 he first saw Poulin and thought that the Cougar would be up to the challenge by the time he was a senior. He felt so confident about it, he told his girlfriend and even went up to Poulin to introduce himself and tell him he could do it.

Garcia needed no introduction with Poulin, who was aware of Garcia and the record he had been "eyeing" since he was a freshman.

Poulin came into the state meet with three state championships to his name (two in cross country and the 2018 state indoor title). While Garcia's record didn't fall, Poulin did add an outdoor track title to his resume by winning the boys 1600 meters with a 4:26. Poulin finished second to St. Martin's Samuel Kellum in the 3200 for the second year in a row.

Will the Duplantis pole vault record ever be broken? Baton Rouge Morning Advocate prep editor Robin Fambrough, who has covered high school sports in Louisiana for over 25 years doesn't think so. And, for what it's worth, neither do I.

I like wearing adjustable ball caps, especially with the trucker mesh body. It's unfortunate that I have a big head, and often unable to find one of these hats that fit..and fit well.  On the inside, many of these hats will lie to you and tell you "one size fits all." A friend in the coaching profession joked that--because of me--they should read "one size fits MOST."