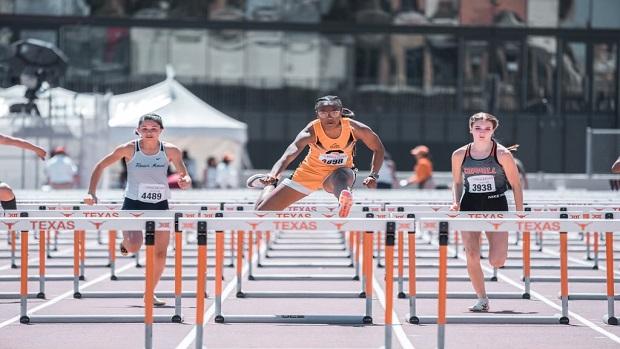 There were many great battles on Friday at the 94th Clyde Littlefield Texas Relays. One example was the girls' high jump. Ruston's Bryanna Craig and San Antonio Reagan's Mackenzie Dagrosa both cleared 5'8, but had to leave the apron to run a leg on their team's 1600 meter relay team.

While they were running, the few opponents left in the girls high jump were busy missing bars and heading up into the stands. When Craig and Dagrosa returned from their leg around the track at  Mike A. Myers Stadium, they were both severely fatigued. Like two prizefighters who both land knockout blows and try to pick themselves up off the mat, the jumpers tried everything in their power to get over the bar at 5-9.25, but it was not to be.

Scotlandville's (Louisiana) sophomore sensation, Makeriah Harris, had full day on her first trip to the historic meet. It started with a smooth 100m hurdles race which saw Harris run a 14.07. Only two hurdlers in the field ran faster on Thursday, and one of those had a favorable tail wind.

After her final-qualifying performance in the 100 hurdles, Harris met up with her teammates Fatima Banks, Sade Gray, and Whitney Harris to drop their 800 meter relay time to 1:38, good enough to qualify for Saturday's finals.

To end the day, Harris battled Katy Meayde Creek's Simone Ballard (40.68) and Allen's Sidney Green (40.82) down to home stretch in the 300 hurdles. Harris finished second with a personal record 40.74. A week after becoming the first Louisiana high school female track and field athlete to break the 42 second barrier in the 300 hurdles at the Texas Southern Relays, she has become the first female to break the 41 seconds at the Texas Relays.

The top three-Ballard, Harris, and Green-all broke the meet record, and are ranked the top three 300 hurdlers in the nation at this time.

Harris's time puts the national sophomore record of 40.10 set by Ebony Collins of Wilson (Long Beach, California) in 2005 on notice.

While there were a few meet records set yesterday at the Texas Relays, there was only one national record broken. Capital's (Washington) Amanda Moll broke the national record in the girls pole vault with a 14-9.5 effort and with the help of a lively section of fans in the northwest corner of Mike A. Myers Stadium.

It was reminiscent of four years ago when world record holder Mondo Duplantis, competing during his senior year of high school, broke his own national record with a vault of 19-5 on the same runway.

While there were no records broken in the boys pole vault competition, it didn't make it any less exciting.Scottsboro's Maddox Hamm won with a 17-2.75. Austin Lake Travis vaulters finished second and third. Jack Mann won the silver with a 16-10.75, and his teammate Sergio Rivas finished third with a vault of 16-6.75.

It was girls' high school javelin after dark as the competition started under the Friday night lights at 9:15pm. Andale (Missouri)junior Mckenzie Fairchild won the competition by over 25 feet, throwing 169-4 on her third attempt. That throw moves Fairchild into the US#1 spot.Humble Atascocita junior  Paris Kimble was the runner-up with a 142-2. St. Louis (Louisiana) LA Emma Freeman improved her personal record by six feet with a throw of 137-0 to finish third. Freeman's throw is ranked No. 2 in Louisiana.

While not quite as dominant as Fairchild, Wando's Troy Cocco had no problem in the boys javelin, winning with a throw of 207-9, which puts him at the US#1 spot. He was the only thrower over 200 feet. Andale's Riley Marx finished second with a throw of 189-4, and Boerne Champion's Connor Warzecha finished third with an effort of 188-2. Cocco, Marx, and Warzecha are all juniors.

In the boys' DMR, it was Grapevine (10:15.48) and Austin Mccallum (10:16.71). The winning Grapevine squad consisted of Trey Leathers, Dylan Hohendberger, Joshua Granados, and Walker St. John.

Summer Creek's Aaron Davis (24-0.25) had his best long jump on his first attempt. It was good enough for the win. Austin Westlake's Ashton Torns was in danger of not making the finals after fouls on his first two attempts. He was able to get into the finals with a jump of 22-8.5. On his fourth attempt, Torns jumped 23-8.75, which was good enough for second place. Katy Thompkin's Jayden Keys (23-6.75) finished third

In the girls 1600 meters, the top six girls ran under the five minute mark. Sophomore Samantha Humphries from Lewisville Flower Mound won with a time of 4:44.90. Anastacia Gonzales of Boerne Champion (4:47.66) finished second, and Humphries sister, Nicole Humphries, finished third with a 4:49.73.