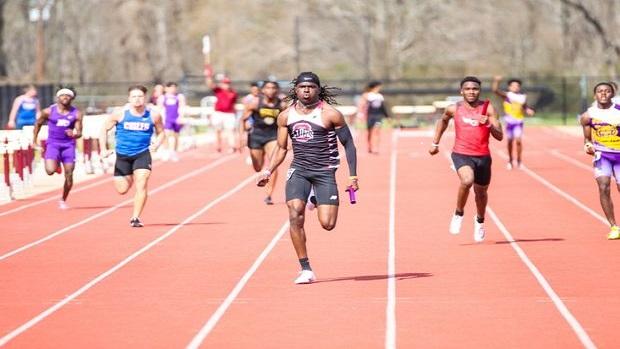 There were several runners at the D&H Relays who had to run against the wind. A lucky few, like Ouachita's LA Austin Willis, didn't have a problem with the windy conditions. Willis is the second leg on the Lions' 400 relay, which won going away with a time of 42.06.

As much as the wind helped Willis--flying down the back straightaway on Grosclose Track-- it hurt Jeremy Nelson, who ran into the teeth of the 16 mile per hour winds. However, Nelson didn't mind as he had used the conditions earlier in the meet to set a personal record and a 2022 outdoor nation-leading mark of 50-3.5 in the triple jump

The wind wasn't only thing helping Willis. It didn't hurt anything that the lead leg of the relay, Chaunky Lewis, made up the stagger and allowed Willis to get the baton in his hand before the other runners in the second leg of the race.

Willis was moving so fast, he ran up on the Lion's third leg, Omari Randle. Randle managed the curve well and had near perfect exchange with the anchor, Nelson.

Despite not having any competition, Nelson was able to extend the lead even further, crossing with a time of 42.06, almost a full second ahead of Clinton (MS) (43.01).

The Lions will go into Week No. 2 of La. high school track and field action with the fastest 400 relay time in the state of Louisiana. Ouachita will compete in the Van Leigh Relays at Neville on Friday before double-dipping and heading to Shreveport on Saturday for Yellow Jacket Relays.

Ruston, who posted the second fastest 400 relay time in the state with a 42.41 at the Bluebonnet Invitational in College Station, is also scheduled to compete in the Yellow Jacket Relays.

Is the Yellow Jacket Invitational meet record of 42.48 set by Ruston in 2015 in jeopardy? If the conditions are right on Saturday, maybe. There is no doubt that the Lions, who finished third in the LHSAA Class 5A State Meet last May, would love nothing more to erase the 2015 mark set by their District 2-5A rivals.

Earlier in the day, the same foursome won the 800 relay (1:28. 61), but that race was much tighter as Nelson had to come from behind on the anchor leg to give the Lions the victory over Clinton.