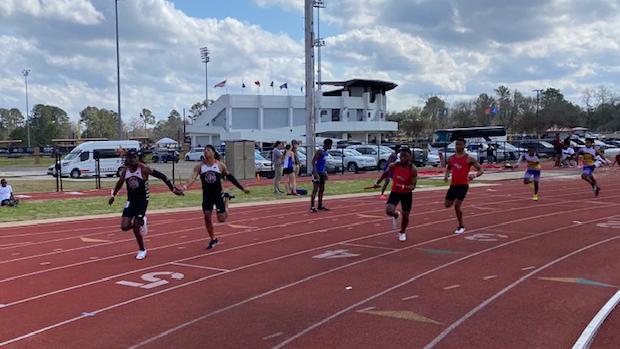 While his hit song may be a little dated for the athletes participating in the D&H Relays on Saturday, most would find Bob Seger's "Against the Wind" relatable as they battled the elements at ULM's Brown Stadium on the first weekend of the 2022 outdoor season.

It was evident with the meet's first field events that it would either be boom or bust depending on which direction they were facing.

For the javelin throwers, it was a bust as they worked to keep the tip of the javelin down during their release. Ouachita's Charles Prince got off the best early throw early on with a toss of 150-0. Prince's throw motivated West Ouachita junior Seth Clampit who sailed one 159-1.

"When he threw that 150, I knew I get farther right there so I was making sure that last throw was the best one," Clampit said.

In the girls competition, it was even more dramatic as Byrd's Caitlin Byrd won the event with a throw of 106-2 on her last throw, edging out Huntington's Chasity Taylor's 102-9.

Despite those marks, it was a rough go of for most of the throwers, who were constantly throwing in 16 mile per hour winds with gusts in the 20s.

The same headwind that hurt the javelin throwers, was the same tailwind that aided the horizontal jumps. Nobody enjoyed it more than Ouachita's Jeremy Nelson, who jump a nation-leading 50-3.5 inches in the triple jump.

Despite getting a PR of 49-11 on his last competition, the LHSAA Sate Indoor Meet, Nelson finished second to District 2-5A foe Brandon Green from Ruston. Green jumped 51-6 at the State Indoor Meet. That mark was a foot and a half better than anyone in the country.

Green opened his 2022 outdoor season in College Station with a jump of 50-2.

"I warmed up really good and had the 4x2 ahead of time so I was really warm," Nelson said. "I was working on my speed. I moved my mark back and I just hit it. It felt really good."

In the aforementioned 800 meter relay, Nelson, the anchor leg, got the baton and found his Lions behind Clinton High School (MS). He had some work to do, but was able to get by the Clinton anchor leg just before crossing the finish line with a 1:28.61.

While the Lions held Clinton off in the 800 relay, they couldn't hold them off in the team scores. Clinton 134 points in the boys division. 30 points better than the Ouachita and West Ouachita, who both tied for runner-up.

On the girls side, Clinton's dominance was even more prevalent. The Arrows scored 179, 105 points more than second place C.E. Byrd. St. Fredrick was third with 66 points.

The Lady Jackets from Byrd were led by senior Nicole Flowers in the 100. Flowers edged out two sprinters from Clinton to clock a 12.60 running against the wind.

"I felt it," Flowers said about the wind. "I got my mind ready. I was like 'you know what? I'm not going to worry about time. I'm just going to worry about executing my race and going through all of my phases. That's what I did, even though I have a couple of things I need to work on. It's the first meet."

Flowers returned at the end of the meet to run a 26.47 to finished second behind Clinton's Shay Lawson (26.41).

Wells got her win moments after watching her brother, Trent Wells, win the 1600 (4:32.59). Wells' teammate, Jamichael Davis picked up the first win of his high school career in the high jump, clearing 5-8.

Wiley wasn't the only Ouachita hurdler to win a hurdles race. In the boys divison, Chaunkey Lewis won the 110 hurdles (15.16).